A recipe for climate action

An overview of the role of cooperatives in climate action

For a long time, the economy was regarded as the "system," while the environment and society were regarded as "sub-systems." The global economy is nearly five times the size it was half a century ago, but global inequality is increasing not only in the global south, but also in the global north, and the myth of economic growth has failed us. It has failed the two billion people who still live on less than $2 per day. Furthermore, it has failed earth’s eco systems, degrading an estimated 60% of the world's ecosystems. 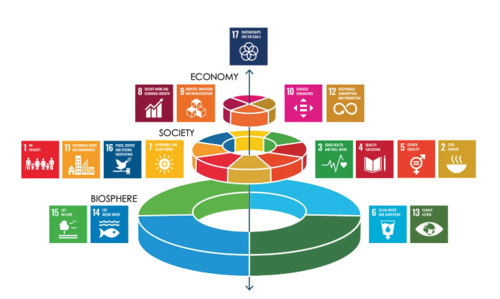 Today, the Sustainable Development Goals are becoming the common language of global impact assessment. However, the 2020 Sustainability Development Goals (SDG) report predicted that 71 million people would be pushed back into extreme poverty in 2020, the first increase in global poverty since 1998. UN Secretary-General António Guterres best summarized the 68-page report, stating that global efforts to date have been insufficient to deliver the necessary change, putting the 2030 Agenda's promise to current and future generations in jeopardy. While at first look, the 17 SDGs and their associated 169 targets may appear to be individual goals, pursuing certain goals/targets often generate ripple effects by influencing other goals.  The achievement of one goal may be inextricably linked to or create conditions for achievement of another goal, or alternatively may limit options, clash with, or even make it impossible to achieve another target. For example, climate-saving minerals such as nickel extracted in Indonesia is powered by coal. This pits SDG no 11 working on sustainable cities against SDGs no 3,7,13 and 17 on good health, clean energy, climate action and partnership for the goals. In an attempt to understand the interconnectedness of the SDGs, the Stockholm Resilience Centre created the “wedding cake model”, which prioritizes the biosphere, and within which, sits the economy and society. Another solution to address the problem of trade-offs of the SDGs could be traced back to Kate Raworth’s “doughnut model” of social and planetary boundaries. Raworth’s model proposed that the economy should primarily fulfill the twelve social foundations without overshooting the nine planetary boundaries. Similarly, the “wedding cake model” emphasizes the biosphere’s health as a prerequisite for economic development and social well-being. The biosphere layer of the wedding cake paradigm has the SDGs no 6, 13,14 and 15 targeting water, climate action, life below water and life on land. Above this sits the social layer consisting of goals no 1,2,3,4,5,7,11 and 16 targeting poverty, hunger, education, gender equality, peace and justice among others. The economic layer that is above the social layer, consists of the goals targeting economic growth and inequalities, industrial production, infrastructure and innovation which are represented by the goals no 8,9,10 and 12. Finally the top layer consists of goal 17 regarding partnerships which transcends all the three layers of the cake. Thus, the wedding cake model of SDGs, promotes a more "ecocentric" view of the world.

Cooperatives, according to the International Cooperative Alliance, are "an autonomous association of persons united voluntarily to meet their common economic, social, and cultural needs and aspirations through a jointly owned and democratically controlled enterprise." Following the wedding cake paradigm, cooperatives provide a path forward, a tried and tested solution that addresses climate change while also confronting social inequality, alleviating poverty, and building resilient economies. They are driven by values, putting equality, fairness and social justice at the heart of the enterprise. They have a significant advantage in their resistance to short-termism, preservation of assets and (indivisible) reserves, and thus consideration of future generations, all of which are core principles of sustainability. Also, any profits made are retained and reinvested in the community itself. Today, there are about 3 million co-operatives with one billion members and employing approximately 280 million people worldwide.

A recipe for success - 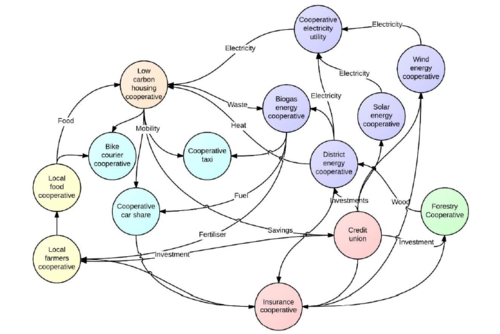 Cooperatives are successfully addressing several planetary challenges, from the Organic Valley, a farmer co-operative in the United States, to the Buchosa housing cooperative in Tanzania, which builds affordable housing for members using innovative environmental mechanisms. El Hierro, the smallest of the Canary Islands, is a vibrant community with many cooperatives that work in a symbiotic relationship with one another to bring prosperity to all. El Hierro has a plethora of inspiration including: regenerative farming cooperatives increasing microbial diversity and produce, renewable energy cooperatives using wind and hydro power, fishing cooperatives using lines rather than nets for fishing, and a transportation cooperative using electric vehicles. Aiming to remain within planetary boundaries, this small island with an annual budget of nearly €29 million, successfully recirculates €23 million in the local economy to build community wealth and ensure abundance for all.

TASC, the Think Tank for Action on Social Change (TASC) has emerged as a prominent voice and actor in Ireland's climate justice movement in recent years. TASC's People's Transition (PT) model, which is heavily focused on achieving a truly Just Transition in rural Ireland, aims to ensure that communities across the island of Ireland benefit from climate action. The solutions TASC co-creates in the People's Transition model, with cooperatives at their core, see climate action as an enabler of local development, giving communities ownership of the assets of transition to zero carbon societies and increasing public support for a Just Transition. The PT process has three core phases. The preparatory phase, the first stage of the PT, entails stakeholder mapping and relationship development. The dialogue phase follows, during which local development needs and priorities are distilled, bringing the community together and building capacity at a local level. In the final processing phase, from the feedback received, TASC develops a set of climate solutions that address a local development need while also creating wealth within the community. In the Phibsborough pilot, for example, the solutions identified were a retrofitting cooperative and a bicycle courier cooperative, whereas in Ardara, a biochar cooperative and a seaweed farming enterprise emerged as the most promising climate solutions based on the needs and strengths of the community. These proposed solutions were met with a generally positive response and a wish to engage in community-led climate action while also building community wealth. For many cooperatives around the world, climate action leadership is now a common characteristic across all sectors in which they operate. This is not to say that every cooperative is addressing climate change effectively and that there is no more work to be done. However, it is evident that co-operatives are one of the most exciting and powerful vehicles for baking a delicious solution to climate change!

Chythenyen is an intern at TASC pursuing his master's in International Relations. He is also a senior editor at "Dublin Law and Politics Review" and an influencer at the "International Council for Circular Economy". He has close to 15 years of experience in activism, social entrepreneurship, waste management and sustainability.