In previous blogs I discussed the nature of inequality in Ireland today. I noted that Ireland i) ranks in the middle among EU countries ii) has unusually high market income inequality and iii) compared to our more equal neighbours, it is less the poorest who do badly, but the working and lower-middle classes. Here I talk about structural and sectoral components of Ireland’s inequality, especially in the labour market, and how best to think about a redistributive strategy.

Sectoral drivers of inequality have several components. Typically the most important source of inequality, at least directly, is inequality generated within industries. It tells us how unequal or not income is distributed internal to, for instance, the construction sector. It is driven by a variety of factors such as the nature of the sector in terms of skill differences between workers, bargaining power between workers, managers, and owners, the institutional and regulatory framework of the sector, and more. The Figure below, taken from the latest TASC inequality report, displays labour-income inequality within sectors in Ireland and for high-income small open economies plus the UK (SOE+UK). Inequality is measured using the Gini coefficient. Green bars denote Ireland and blue bars denote comparator averages. Bars with black outlines denote time-adjusted labour-income inequality. Labour income is basically income per unit time, similar to hourly wages or self-employment income per hour. 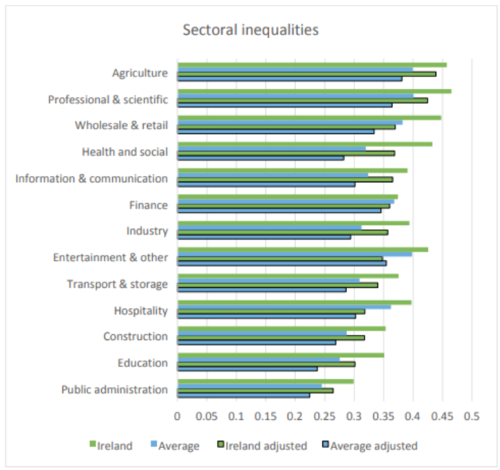 Source: The State we are in.

Looking at the unadjusted data, inequality in Ireland is higher in every sector of the economy than the comparator average. The most unequal are professional and scientific, agriculture, and wholesale and retail. These sectors are also among the most unequal in the comparator countries. With Gini coefficients greater than 0.4, health and social, and entertainment and others are also among the more unequal sectors in Ireland. Health and social, however, is not particularly unequal among comparators.

When working time is controlled for, the tipped bars show agriculture becoming slightly more unequal than professional and scientific, but the two are still the most unequal. There is a large fall in inequality in wholesale and retail, and health and social but they still rank as the third and fourth most unequal respectively. This indicates that low working time, namely more part-time and seasonal work, is responsible for some of the inequality in these sectors. Nevertheless, it is clear that Ireland has comparatively high levels of inequality in almost every sector of its economy.

Another way to look at sectoral inequality is to examine if employment is disproportionately located in low productivity, and hence low-pay jobs. As I and others have examined elsewhere, the composition of Ireland’s economy works against it in terms of redistribution. Put simply, as the table below shows Ireland has a comparative glut of hospitality and agricultural jobs in terms of shares of total employment. Compared to the EU-27 or Euro area, the share of employment in low productivity sectors is 3% higher, compared to SOE-UK it’s almost 8%! Though the agriculture is a major exporter and hospitality in part reflects tourism, the fact is that when you take the three low technology sectors, they count for a disproportionate share of the Irish economy. Ireland is thin in the ‘middle tier’ of sectors as it has more workers employed in high- and low-income sectors than comparators. Manufacturing, for instance, has traditionally been of comparatively minor importance here.

Another thing to look at is how poorly-paid low pay sectors are, and how well-paid high pay sectors are. When the former is low and the latter is high, inequality is exacerbated. The figure below shows the ratio of the (average) wages of the two best-paid sectors to the two lowest paid sectors. For the purposes of this figure, the two best paid sectors in Ireland are the education and energy sectors, and the two lowest paid are administrative support and hospitality. A more disaggregated would surely produce different results – retail would perhaps be in the bottom two and the tech sector toward the top. Similar to overall levels of inequality discussed in a previous blog, we see that Ireland ranks in the middle as wages are two and a half times higher in the better paying sectors. Compared to the more successful SOE-UK economies, inter-industry differences are significantly more pronounced here. Not surprisingly, the more equal countries tend to have smaller inter-industry wage and income differences, attested by the Nordic countries clustering toward the left end. 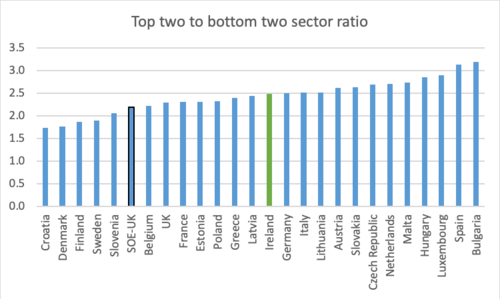 It is often remarked that the post-war period in Europe was one of both remarkable growth and historically low levels of inequality. Thus, it is claimed, that our economies can support lower inequality through, for instance, higher wages without adversely impacting living standards. This is certainly the case in Ireland as argued here, among other places. But it should be noted that structurally advanced economies are quite different today. The automation of manufacturing and the entry of women into the workforce means that not only are economies are much more service-based, but many of those services are face-to-face, low-margin, and low-productivity. Even with much-needed public investment to bring costs down, the hospitality or childcare sectors, for instance, are unlikely to be ever capable of paying wages like middle-skilled manufacturing or even the construction sector. One solution is to make a more serious attempt industrial upgrading by devoting greater resources to industrial policy so we reorient away from dependence on low-pay employment. Another is to take care out of the market and have greater public provision, as the Nordics do. This way we can have decent wages and conditions, without making it unaffordable to households. Both strategies would need to complement the traditional progressive case for collectively-bargained higher pay.