The solution to the housing crisis?

There is general acceptance that the housing crisis has reached unacceptable levels. However, the government’s current policies are inadequate to address the crisis because, firstly, they underestimate the scale of the crisis. Secondly, they are refusing to accept that the overall housing policy framework they are pursuing through Rebuilding Ireland has failed disastrously to provide affordable housing. This article makes the case that the level of housing ‘need’ is much higher than current official estimates and that Rebuilding Ireland should be deemed the failure it is, and a new housing policy developed.

A new housing policy for Ireland should start with the aim of ensuring everyone in this country has their right to a home fulfilled i.e. access to affordable, quality and secure housing and this is to be achieved by the state playing a central role in ensuring the building of public housing on major scale.

This ‘public housing’ should be a new form of social and affordable housing – available for a range of incomes considerably higher than current social housing limits. This would involve the state (mainly through local authorities, but also through not-for-profit housing associations and co-ops, and a new state house building agency) using public land to build high quality, well planned and environmentally sustainable ‘communities’ of different housing types for a range of households including workers of all incomes, families, students, the elderly, those with disabilities.

Key questions that flow from this approach include what is the correct amount of this ‘public’ housing the state should provide and how does current policy compare to these required levels, and importantly, how can it be funded, and how could the upcoming budget address this? 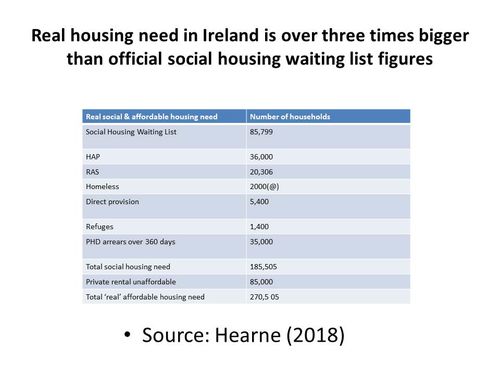 Firstly, in regard to estimating the real housing need it is clear that there are a large number of households who are affected by the housing crisis in terms of housing unaffordability. However, the current estimates of housing need are restricted to the numbers of households that qualify for social housing which is currently 85,799 households on local authority lists. This list does not include tenants who are in the private rental sector in receipt of social housing supports like the Housing Assistance Payment (HAP) and the Rental Accommodation Scheme (RAS). These tenants do not have security of tenure (they can be evicted by landlords) and therefore they are still in housing need.  Neither do the official lists include some homeless households, those in direct provision, and those in domestic violence refuges, who are all clearly in housing need. Furthermore, there are approximately 35,000 home owners over 360 days in arrears on their mortgage, and who are also clearly in major housing need.  If you add these together then the total social housing need becomes 185,505 households, over double current estimates of need. This figure demonstrates the real scale of the crisis that is being currently underestimated. The problem is if policies are underestimating the real scale of need they are clearly going to be ineffective in meeting the actual level of housing need.

Furthermore, we know that the housing crisis and need for ‘affordable’ housing extends to much more households than these above. It includes many renters in the private sector who are paying more than 30% of their income on rents (an internationally accepted definition of ‘affordable’ housing), it includes aspirant home owners who cannot afford current house prices, students and many adult children living at home with parents, couch surfing, etc.  While it is difficult to estimate how many households this includes, the ESRI estimates that a third of renters in the private rental sector have ‘high’ housing costs. If you remove the 56,000 HAP and RAS households from the private rental sector, this equates to 85,000 households in need of affordable housing from the private rental sector. Adding this to the previous estimate of housing need gives a total of 270,505 households in need of social and affordable housing – three times the current social housing waiting list.

There is another way of estimating what the correct amount of social and affordable housing Ireland should provide and that is to look at the level provided in countries with effective housing systems that ensure their populations have access to affordable housing.  In such countries like the Netherlands, Sweden, Austria and Denmark, their social housing (non-market housing) comprises between 24% and 40% of all housing stock. In Ireland just 10% of housing stock is social housing. A good target for Ireland then, if we are to fundamentally solve the housing crisis permanently, is to bring our stock of social housing (taking the form of new ‘public’ housing) up to around 30% of total housing stock. This would equate to approximately 606,800 units. However, our current social housing stock is only 176,178 units. So we would need to add 430,689 public affordable units.  If we were to do this over a reasonable timeframe, say ten years, then that means providing approximately 43,000 units per year of new public housing (this could be approximately, 27,000 for those qualifying for ‘social’ housing and 16,000 for those on higher incomes).

When we compare these to the Rebuilding Ireland targets and its approach to delivery we can see clearly why the Government and Department of Housing have failed to solve this crisis. Rebuilding Ireland aims to provide between 21,000 and 26,000 ‘new’ social housing units per annum. These are interesting and useful figures because providing 26,000 new social housing units per annum, over 10 years, gets close to meeting the level of actual social housing need I have calculated earlier (at 270,000 households, but this is a static figure based on current need and assumes that housing need does not grow, and in the current climate we can see this is not the case so these are conservative figures). However, the Rebuilding Ireland figures are completely misleading because approximately 18,000, or 70%, of these ‘new’ units are not new social housing stock but just various forms of subsidised private rental housing via HAP or RAS schemes. This is a vital point to understand because not only is HAP and RAS insecure for tenants, it is very poor value for money as the state is handing over almost €750million a year to private landlords, and it worsens the rental and housing crisis by adding to demand rather than supply. The housing crisis is a crisis of supply, but it is the lack of social and affordable supply that is at its heart.

There is increasing cross-society consensus that a core solution to the housing crisis is for the state to build more social and affordable housing in the form of new public housing in well planned mixed income communities (via cost rental and other forms of social and affordable provision delivered and managed by local authorities, cooperatives and a new housing agency and including CPOing derelict buildings and sites).

However, the government appear steadfast in their commitment to not building. Instead they remain committed to the flawed Rebuilding Ireland approach of ‘incentivising’ the private market and relying on the private rental sector for social housing. The latest policy announcement of the setting up of a new Housing Agency, unfortunately, is the extension of these same policies as it is not undertaking the building but instead relying on making deals (joint ventures) with private developers and only plans for ‘up to’ 30% affordable housing. This approach has not worked in the past and there is no indication it will work now. The only way that we can guarantee a supply of real affordable housing is if the state builds it. Relying on the private market to provide affordable housing is like relying on alchemy to get rich.

What is required to solve this crisis is a structural shift where at least 30% of our housing stock is comprised of public (non-market provided) housing, as per countries with successful housing systems like Sweden and Austria.

To do this requires a significant increase in funding for capital expenditure on social and affordable housing and developing this new ‘public housing’. It also requires an emergency state-funded expansion of funding to get tradespeople into apprenticeships and ensure we have the various skilled workers required.

The current capital allocation on new building at approximately €800-€1bn billion per annum is completely inadequate. In the coming budget there is the fiscal space to allocate an additional €2bn to capital funding for state house building. The government could do this by using all the fiscal space it has for expenditure (an additional 900 million than currently planned), allocates the rainy day fund to housing (500million), drops proposals for tax cuts (270million), and introduces a wealth tax (300million).

The issue really is about political will and choices. Currently there is a failure to accept and calculate the real scale of the level of housing need. The funding is inadequate and the private market approach still dominates government and Department policy considerations. We need a major shift. A good framework would be to guarantee the right to housing (ensuring everyone has access to an affordable, secure and quality home as per the United Nations definition of the human right to housing) as the guiding value and principle underpinning housing and economic policy. Flowing from this policy should work to achieve 30% of our housing stock as public housing (as a new tenure for a range of incomes and households including genuinely affordable rental, non-market co-operative ownership etc) and this requires dramatically increasingly the capital allocation in the coming budget to ensure the state (non- market) delivery of at minimum, 27,000 new public units per annum (working quickly to delivering 43,000 per annum). Anything less will leave us with an ever-worsening housing disaster.