Book review and summary: "Deaths of despair: the future of capitalism"

This book will give you a greater understanding of why so many people support Donald Trump. It will also shock you with some of the statistics and make you wonder. Anne Case and Angus Deaton are leading economists at Princeton. Deaton won the Nobel prize for economics in 2015.

The title of the book comes from the great number of deaths of low-educated white Americans who, in despair at the lack of opportunities, die early because of alcohol, drug addiction and suicide. The security of a well-paid, unionised job in manufacturing for less educated, American, white males has disappeared offshore or was automated and if replaced, it is with precarious, badly-paid, part-time services jobs. "Domestic outsourcing has thoroughly transformed the nature of the employment relationship for a vast number of jobs ranging from relatively low skill tasks like cleaning and security to high skill tasks like human resources and accounting." They point out Google employed more temps and contractors in 2019 than it did employees, even though they both work together. 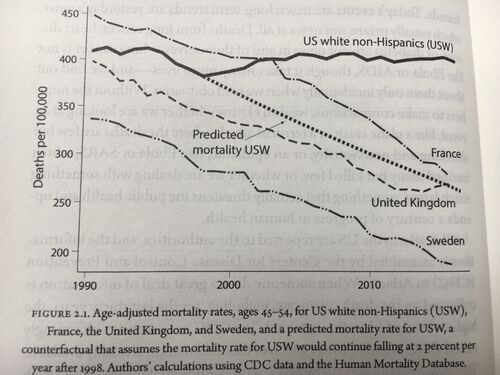 As the chart shows, in all wealthy countries mortality rates for those aged 45 to 54 has declined since 1990. "However, not alone did US white non-Hispanic Americans not keep pace with mortality declines in other countries but mortality for them stopped falling altogether and began to rise," the authors found.

When Case and Deaton analysed this trend - “To our astonishment, it was not only suicide that was rising among middle-aged whites; it was all deaths,” they write. The trend applied to both men and women. The American Dream was failing a large section of the country.

One source of the problem was America’s all-too-ready supply of prescription opioids where for decades, drug companies blithely played down their addictive properties, the FDA stood by, and doctors gave them out without warning of their addictiveness, in cases incentivised by exotic trips. While opioid deaths plateaued in 2018 for a while, suicides and alcohol-related deaths continue upward.

The notorious Sackler family's Purdue Pharma released OxyContin in 1996, an opioid similar to heroin which released its dose over the course of many hours. Some patients became addicted to the drug they were prescribed, and with relaxed prescribing practices and through some doctors, the drug also went onto the black market. The Purdue company has sold between $30 and $50 billion worth of OxyContin. "The fraction of people in the area who voted for Donald Trump is also strongly correlated with the fraction in pain" and thus using these drugs, they found.

Case and Deaton also argue "a substantial fraction of opioid deaths was caused by the American health care system. It is the most expensive in the world but it's failing to prevent a decline in life expectancy but worse is contributing to its fall".

In looking at which the states this is happening, they found increases in all but six states, with the largest death rates in West Virginia, Kentucky, Arkansas and Mississippi. These are all states with lower education levels than the national average.  In their analysis, they found a strong correlation  between deaths from the three causes - drugs, alcohol and suicide - in white middle-aged males and with their educational attainment levels. They point out that many jobs were once open to non-graduates are now reserved for those with a college degree.  Many Americans are not well educated.

They found of those born in 1980, whites without a bachelor’s degree, are four times more likely to commit suicide than those with a degree. In contrast when the sociologist Emile Durkheim was doing his big study of suicide in 1897, it was the more educated people who were more inclined to commit suicide.

African Americans have harder lives than whites. They die younger; are less likely to go to college; or find employment; will earn less than whites; have less wealth; are less likely to own their own home; are more likely to be in prison and to live in poverty. However since 1970, black education, wages, incomes and wealth are risen and black mortality rates have declined by more than those of whites. The authors say that more than half of white working-class Americans believe that discrimination against whites has become as big a problem as discrimination against blacks and other minorities. In contrast, only 30% of white college-educated Americans would agree with this. They quote historian, Carol Anderson who said that "to somebody who has always been privileged, equality begins to look like oppression."

Case and Deaton disagree with political scientist Charles Murray's views in his book "Coming Apart." He attributes many of the problems of less-educated American whites to "their own failure of virtue - particularly their failure of industriousness, meaning they are no longer interested in working for a living or in supporting their families."

Some critics of this book say that the authors, in their defence of the capitalist system have failed to look at its systemic failures. Case and Deaton argue "Capitalism is an immensely wonderful force for progress and good" and reject "some fantastically socialist utopia." They thus seem unaware that there are varieties of capitalism and the US is one of the worst for a substantial minority of its citizens. However, they do recognise it not a free market economy.

While this criticism of the books is correct, they do offer a number of reforms which would be transforming and progressive. The biggest reform would probably be a socialised health system. It would cost much less than the current US system and importantly also get rid of the immense insecurity that so many Americans have.

They are strong advocates of union recognition pointing out that "unions helped keeps wages up and help to give workers some control over the workplace and working conditions." "The good wages that one support of the blue collar aristocracy have largely vanished and manufacturing has been replaced by service jobs" which pay very poorly and they advocate better minimum wages and better governance of firms, with some trust-busting.

The big division between those with and without a college degree is not a characteristic of other rich countries and so this has to be addressed in the US, they argue. Interestingly, they also point out that in other countries "the traditional Social Democratic parties that represent Labour are no longer seen as very different from the parties representing capital".

They also advocate dealing with legalised drug abuse with over-prescription and the abuse of dominance by Big Pharma, though with less anti-trust action than many would advocate.

The book is well written and despite it complexity, it is quite readable and very informative.