Ireland’s corporation tax revenue is set for a large fall

Ireland has received bumper corporation tax revenue over the past decade, something which has puzzled many economists. The Irish Fiscal Advisory Council estimate that €22 billion of receipts over the past seven years cannot be explained by activity in Ireland.

However, that is not to say it cannot be explained. The below figure compares the net corporation tax of the 10 largest payers, with the net income of these large corporations. The two move in tandem, with Ireland collecting about 2% of these firm’s net income. This net income is for the firm, and not just operations in Ireland. These 10 firms pay roughly half of all corporation tax received by the Irish government. 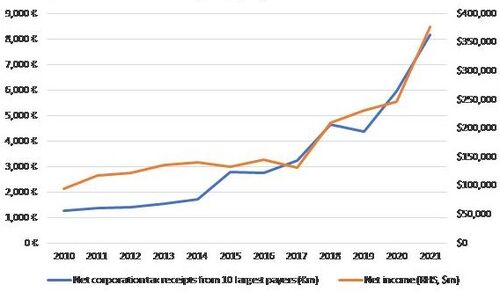 Unfortunately, the latest data shows the net income of the 10 largest payers has already begun to fall (figure below). This can be explained by a slowing global economy reducing firms’ advertising expenditure with Meta (Facebook); pharmaceutical sales declines as Covid-19 recedes; and firms and consumers no longer needing to buy IT equipment as they brought forward purchases during lockdown. 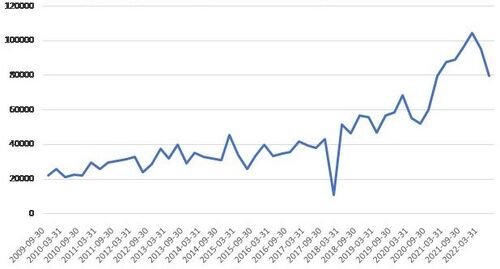 If the past patterns continue, Irish corporation tax receipts are likely to decline, just as recession begins to bite across the US and EU.