Supply and demand in housing

Does supply work and is all supply equal?

With the ongoing affordability problem, Housing for All, the recent budget, and more the housing issue isn’t going away any time soon. A regular point of discussion has been the issue of supply, and to what extent increases in supply will or will not alleviate affordability. Here I interject and lay out my thoughts: the idea that increases in supply put no or limited downward pressure on prices is based on a misreading of evidence. It extrapolates trends from the 2000s bubble, which was a most unusual episode. On the other hand, I agree that not all types of supply are equally desirable and that public investment has the capacity to dampen prices more than private development.

It is sometimes argued that housing is unusual and that expensive housing, such as Dublin apartments rented out by institutional investors, forces renters to rent at the premium end of the market. Despite contributing to greater supply, rents do not come down and may actually be dragged upwards. It is pointed out that the supply of housing increased enormously in Ireland and Spain in the 2000s and, despite this, house prices continued to rise. One cannot be sure, then, that increases in supply will lower prices, at least private supply.

The figure below shows the case of Ireland. Supply on the left axis refers to units built whereas real house prices is shown as an index on the right axis. Most of the action begins in the early 90s when the number of units built expanded enormously, well above anything that could be explained by fundamentals such as income or population growth. Despite the stock of housing increasing relative to the population, house prices increased in real terms almost fivefold between 1988 and 2006. This is completely contrary to the idea that increases in supply reduce prices. Recent, pre-Covid years have been more in line with expectations – when supply returned to the ~20,000 mark in 2017-19, house price growth slowed. 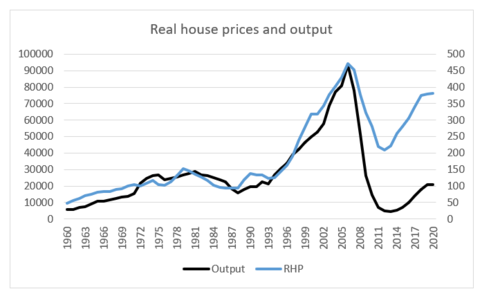 So what gives? That an inordinate number of units were built in the 2000s was one sign of a housing bubble. Another sign was the trajectory of the house price-to-rent ratio. Normally, this ratio does not vary much, absent a speculative bubble. If there is rising demand for housing because of, say, population growth, then a larger population generally requires both more rental units and units for purchase. This should push up demand for, and hence the cost of, both renting and buying. Excess housing demand, a supply-demand imbalance, should therefore leave the price-to-rent ratio unchanged.

If, for some reason, the cost of buying becomes expensive relative to the cost of renting (and the ratio increases), we would not expect the imbalance to endure. This could happen if a planning system change favoured the rental sector. As buying is now relatively expensive, it induces more people to rent. As people rent more and buy less, it pushes rents up and purchase prices down (and the ratio decreases). If this sounds too neat to be true, note that the ratio is largely stable between 1980-95, and has also been stable for the past decade. 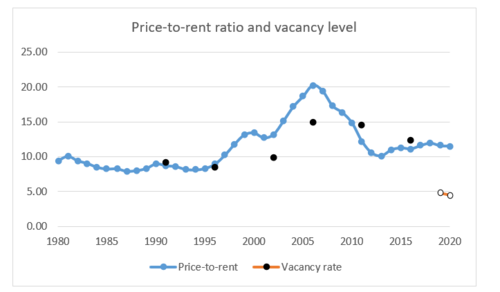 Sources: Price-to-rent based on McQuinn (who kindly shared data). Vacancy rates are per CSO census. 2019 and 2020 figures ultimately based on GeoDirectory.

That this did not happen in the 2000s indicates something caused prices to increase but not rents. Given the level of output, it was clearly not a housing shortage. Excess demand, which is basically a supply shortage, would also leave the ratio unchanged, as discussed. Price increases were therefore not a result of supply-demand imbalance – prices were out of kilt with ‘fundamentals’.

Instead, construction was driven by easy credit and expectations that prices would continue to rise so that large capital gains could be made through quick purchases and sales – flipping the house. We now know this, but the signs were there. That is why rising supply did little to dampen prices as housing output was not satisfying an underlying demand, but was built and bought with the expectation of quick subsequent sales. As more money and speculators entered the fray, prices continued to rise. A similar trend in the price-to-rent ratio is observable in the US and Spain which had housing bubbles, but not in, say, Germany and Austria.

Aside from overbuilding and rapid price inflation, trends in the vacancy rate also pointed to a housing bubble. As more units were built, a higher share of them became vacant. More and more people were riding the speculative wave and buildings were lying empty. If building had been satisfying a demand for housing, then the vacancy rate should have fallen as supply increased.

The vacancy rate is much lower today than even in the pre-bubble early 1990s. This is another indication of a housing shortage (and the absence of a bubble). Increasing supply would therefore put downward pressure on prices today, unlike the 2000s. Indeed, as building picked up pre-Covid, the rate of price growth abated. The idea that expensive housing drags up prices is based on a misreading of the 2000s. Expensive housing reflects a lack of supply. Moreover, when people move in, even to expensive housing, they vacate their previous homes, increasing the supply of that segment on the market. Granted, there is evidence of mansions of the super-rich lying vacant in major cities. That type of supply does little to improve affordability but is a rather marginal segment.

Does that mean all supply is equally desirable? Despite the fact that apartment standards have been deregulated to entice developers to build, the private sector still seems incapable of meeting Ireland’s housing need. The benefit of public building is that increasing supply is a choice, not reliant on the vagaries of the market. It can decide on standards and, indeed, public housing is of very high quality in some countries. Moreover, the state does not require the profit margin of 15% or so that private developers do, so increasing supply through public investment can be cheaper and can put more downward pressure on prices than for-profit housing supply. Unfortunately, the supply of new units through public investment looks set to fall, despite nominal increases in spending.

Importantly, local authorities often find it more expensive to build than to purchase or lease completed units from the private sector. It seems that the high cost of land is a major impediment. If more land were acquired by local authorities ahead of time, including by use or threat of CPO as happens in other countries, then local authorities would not need to acquire units from a hot, expensive private market. This would be a more effective land management tool than a 3% levy on unused, zoned land as committed to in the recent budget. It would also make our social housing system more cost-effective. I therefore agree that not all supply is equally desirable.

To sum, the idea that increases in supply do little to dampen house prices is a mistaken extrapolation of trends of the 2000s. With no speculative bubble and very low vacancy rates, increasing supply is sure to improve affordability. The private market is, however, misfiring and the state needs to step in. Building public housing on public land should be more cost effective than for-profit development, if authorities can be empowered to do so.