Is there a progressive approach to construction viability?

Global inflation has been hitting most of us hard. It has the potential to derail, or at least wobble, Ireland's recovering housing market. The claim that much building is financially unviable remains a thorny issue. If correct, it follows that policy should enable more profits to flow into construction, for example by further deregulating apartment standards, reducing workers' pay, more fast-tracking of planning, and so on.

For my money, there's merit to the viability argument. The recovery in the house prices-to-general construction cost ratio to its pre-crash levels and the increase in house building suggest viability has returned. However, new issues have emerged. This includes not only recent material inflation but better enforcement of planning, higher energy efficiency standards, removal of bubble-era tax breaks, and a greater share of apartment buildings. Nevertheless, there is a high-road, investment-led path forward to improving viability – one that doesn’t rely on regressive reductions in standards and pay.

A major cost in construction is the cost of labour. Is there scope for reductions? Average hourly pay in the construction sector is a little below economy-wide earnings – around 91%. This gap has been stable for many years, though there’s much going on under the hood. Below is a figure taken from a TASC/CIOB report from last year. It shows pay of construction workers as a percentage of national average pay in comparative European context, measured by full-time equivalent monthly income. While not identical to hourly income, it is very similar. It is monthly income adjusted for working time; so, for part-time workers it is what would be earned in full-time work. Importantly, the figure considers pay among all construction workers and among white-collar construction workers. White-collar refers to non-craft and non-manual workers. 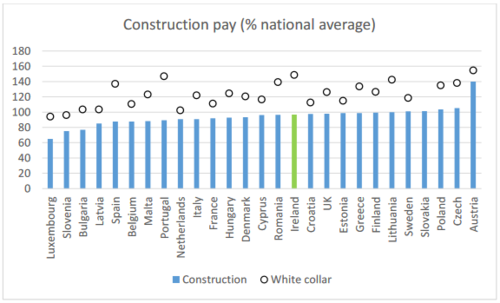 It confirms that construction worker pay is close to but below the national average, and that this places Ireland a little bit above the EU average. This is largely driven by white-collar construction workers, who are the second best-paid in the EU. Indeed, when the exercise is repeated for craft workers Ireland is only 16th best paid out of 26 countries, and for manual workers we are 19th ‘best’ paid out of the 26 countries. For them, pay is below EU average.

Insofar as pay should be restrained in the construction sector, then, perhaps it is the architects, managers, and CEOs, not the plumbers and labourers. Pay ceilings on CEO pay of, say, €6-700,000 would reduce not only director pay but percolate down the hierarchy to senior management, and has worked in the banking system. Perhaps it is the project-specific costs that matter most. Facilitating civil engineers, architects and other white-collar construction workers from developing countries to work here would also limit wage growth.

The Irish construction sector is considerably less productive than its European neighbours. Output per hour worked in Irish construction is 13th of 23 euro area countries, despite overall, economy-wide levels of productivity in Ireland being much higher. This means that it takes longer to produce a given level of construction output which, all else equal, raises costs.

Generally speaking, construction has not loaned itself to rapid increases in productivity. The main reason is its non-standardised output. Even when housing design is the same across units, and it typically is not, each unit is built on different land, which may have its own site-specific challenges. Construction also has high levels of cyclicality, informality, fragmentation, and sometimes corruption.

As to why Ireland is so lagging is open to debate. The Irish construction sector has been unusually cyclical and the sector was decimated during the financial crisis. Developers may not have been as professionalised here as in other countries, but were perhaps former tradespeople who moved up the sector into management and directorships. After the crisis and after exiting NAMA, they may not have had the resources to replenish their capital stock and invest in new machinery. Or they may be reluctant to, given Ireland is so cyclical – you don’t want to invest in lots of equipment if another downturn is around the corner. A recent analysis also points to a complex planning system, poor procurement practices, reliance on precarious workers, and lack of training.

As to how this may be addressed, a construction-based industrial policy might offer a way out. Construction sector R&D spending is low in Ireland – 22nd out of 25 countries. This could be addressed through public investment in construction R&D, leading to university-industry synergies. Offsite construction, where much of the assembly of buildings is done in factories before being transported to sites, is another way. Ireland is set to ramp up spending on social housing in the coming years and it could specify that a certain percentage of them must use offsite construction, as suggested here. As well as potentially increasing productivity, it would also shed hazardous forms of work. Precariousness could be addressed through legislation and through mandating no bogus self-employment in publicly-procured projects.

It is common to have a pop at the planning system. While I’m skeptical that it should shoulder as much blame as some contend, there are problems with it. The uplift in land values with and without planning permission seems to be considerably higher here compared to the UK. This suggests uncertainty in the time taken for and the outcome of planning applications. Indeed, planning uncertainty is cited as a major impediment to for-profit construction viability.

I (and others) have argued that Ireland could adopt a more active approach to land management. Active management means many things, including that state agencies buy private land, furnish it with infrastructure, and then either build on it, sell, or lease it back to the private sector for use. This would require a more infrastructure-led planning system, whereby it is only after there is certainty that infrastructure is in place, that it receives its designated zoning.

Active land management would also make greater use of master planning, whereby plans have more detail in terms of building type and density. This would entail significant engagement with communities in drawing up a plan, and limited grounds for objections after the plans are made. Obviously, significantly more resources would have to be devoted to planning, so that local authorities have the necessary architectural, quantity surveying, environmental, and other types of expertise. This could be actioned through many policies including extending the capacity of state agencies to acquire land and increasing planning fees.

The claim that construction suffers from viability challenges merits serious consideration. So does the full range of policy options to address it.