‘Degrowth’ in the North of Ireland – what is it, and why do we need it?

In this long read, Seán Fearon discusses what is meant my de-growth and what degrowth could mean for Northern Ireland.

The language of economic growth is the language most of us use to speak about and understand our economy. A ‘growing’ economy is good. Recessions are bad, associated with job losses, hardships and wage cuts.

However, a rising tide of research and commentary, which has its roots in years of scholarship but which is only now finding a foothold in public discourse around the climate crisis, concerns the concept of a ‘degrowth’ or a ‘steady state’ economy.

It poses a number of questions which profoundly challenge the assumptions of the economics profession, and of all of us – why should our economy endlessly grow? Who does economic growth actually serve? And, critically, can our planet withstand the endless resource extraction, energy consumption, and carbon emissions which underpins growth?

In a nutshell, degrowth economists argue that we move urgently away from an obsessive and disastrous focus on GDP growth which is causing rampant inequality, ecological collapse, and a fundamental threat to our democracy. Here we explore why.

Typically measured in Gross Domestic Product (GDP), growth is, for most of us, the only metric by which we chose to assess to health of our economy.

With its roots in the 1930s, the original purpose of GDP was to offer a measure of the total productive capacity of an economy. In textbooks, GDP is defined as the total market value of all goods and services produced at an economy at a particular point in time.

Looking at GDP in this way lays bare the dangerous folly of ‘growth’ as the priority measure of economic performance. Indeed, in this neoliberal age of spiralling inequality, corporate giants and growth-obsession, it is increasingly becoming a proxy for the growth of the fortunes of the richest in society.

In the UK, Australia, and the United States, between 20-50% of all new income has accrued to top 1%[2]. Since 1980, 28% of all new income has been raked up by the top 1%, globally, and a staggering 48% going to the richest 5%[3]. Half of all economic growth in the last forty years has only served to make the richest 5% of people on earth even richer. Meanwhile, across the UK real wage growth in the last decade for the average worker has been the slowest in over two centuries[4].

Growth, degrowth and the climate catastrophe

But the real danger behind the GDP as the only discernible measure of economic performance is the catastrophic impact this orthodoxy has had on our climate.

As of 2020 the world economy and its capitalist nature, driven inherently and inextricably by the need for constant expansion and capital accumulation, has burst through finite limits of our planet. Indeed, it has broken down our fragile global climate on which all life on earth depends.

The engine at the heart of capitalism is expansion. Any vast corporation or small business that doesn’t grow, that can’t compete to become more productive and offer ever more products at a cheaper price, risks folding. So it must grow. There must always be more goods to produce, and more machines, vehicles, and software to produce them with.

In other words, the income measured by GDP is an output. But we rarely hear of the endless exploitation of inputs needed to create it – overworked and underpaid employees, minerals and metals harvested from the earth, humming data servers, and all of it powered by fossil fuels billowing CO2 into our atmosphere.

In short, "the essential problem is the unavoidable fact that an expanding economic system is placing additional burdens on a fixed earth system to the point of planetary overload"[5].

Between the year 1AD and 1000AD, under subsistence forms of economic activity, annual economic growth per capita in the West was essentially zero[6]. For the next 500 years out to 1500AD, best estimates of annual GDP growth were somewhat higher, at 0.12%[7].

It was the onset of capitalism and its colonial growth dynamics, further unleashed by the industrial revolution with imperial extraction and fossil fuel power at its core, which led to a surge in extraction and economic expansion. By the 20th century, and particularly in the aftermath of the 2nd World War, dramatic GDP expansion in western capitalist states, propped up by a binge of cheap oil and population growth, transforms the relationship between human economic activity and the planet to one of profound instability and unsustainability (Figure 1). 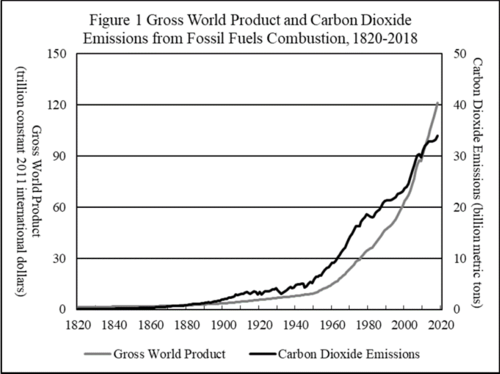 Source: Li, 2019, ‘Anthropocene, Emissions Budget, and the Structural Crisis of the Capitalist World-System’

Opponents of the degrowth case have advocated ‘green growth’, and that we can ‘decouple’ the rates of GDP growth and emissions growth which have been bound together throughout the 20th century.

However, these arguments are buttressed by evidence of some relative decoupling between emissions and GDP growth in the last two decades as Western economies increasingly shift towards digital and service-based activity, said to be less carbon- and resource-intensive. This is immediately visible in the years of the 21st century in Figure 1.

The fact is there has been a decoupling between emissions and GDP growth. But this fact isn’t a matter of debate among the degrowth movement. The central point is that, because of the insatiable and rising demand for energy and resources placed upon society by an endlessly growing economy, growth as the central and defining objective of economic strategy is incompatible with the rapid rate of decarbonisation needed to avoid a ‘tipping point’ of irreversible global heating and climate catastrophe. We cannot grow our economy forever, and also reduce emissions fast enough to prevent climate breakdown. This is explored in detail below in the case of the North of Ireland.

The evidence is also clear among the sections of the scientific community. In January 2020, over 11,500 scientists from 153 countries across the world co-signed a ‘Warning of a Climate Emergency’ in which they explicitly called for a “shift from GDP growth and the pursuit of affluence toward sustaining ecosystems and improving human well-being by prioritizing basic needs and reducing inequality”[8].

GDP growth as economic development in the North

Obsession with economic growth, indeed the need for it within our current system, is at the heart of the climate crisis. But in more tangible policy terms it is also miserably failed as a primary measure of economic development in the North of Ireland, as elsewhere.

Since the Good Friday Agreement in 1998, the economy in the North has grown by some 45% in real terms (Figure 2). In order to remain stable and maintain reproduction of profits and dividends for further investment and expansion, a capitalist economy has to grow annually by 3%. The consequence of this is that the economy in gross terms doubles in size every 25 years as a result of the compound function of growth[9]. When measured in gross terms, this trend is also observed in the North of Ireland since 1998, according to ONS statistics. 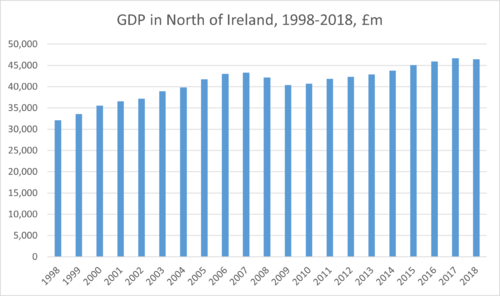 Despite this dramatic economic expansion in the last 20 years, no sober analysis of social progress in North could claim that the welfare and living standards of citizens have soared in manner that GDP figures might lead us to believe. Real wages in the North in 2019 were actually lower than they were over a decade ago in 2009[10]. In fact, across the UK real wages have risen by just 15% since 1998[11].

Moreover, rates of poverty and deprivation, poor educational attainment, and inequality remain stubbornly high. As of 2016, the bottom 10% of earners claim just 3% of all income, while the richest 10% of people in the North scoop up a quarter of the total[12]. A recent estimation of the North’s Gini-coefficient, the most widespread measure of income inequality, is 0.3%, higher than many comparable high-income EU and OECD states[13].

Emissions, GDP, and decoupling in the North of Ireland

So what, then, has been the relationship between carbon emissions and economic growth as the primary objective of development in the North? Has there been a ‘decoupling’ of economic emissions as is observed elsewhere in high-income states? And can we still grow our economy while reducing emissions in a manner consistent with climate science? On the available evidence, this answer, put bluntly, appears to be ‘no’. 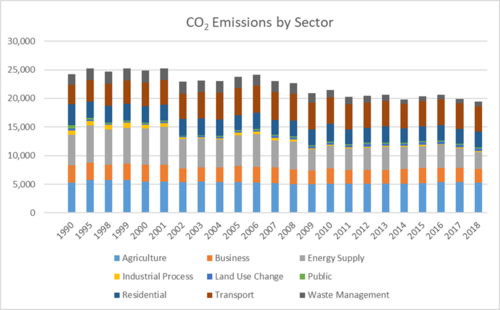 Total carbon emissions have fallen by just 20% since 1990 and by only 10% in the last ten years (Figure 3)[14]. In large part this has been driven by a shift towards renewable electricity, and not a broader decarbonisation of economic activity. In fact, the opposite appears to be the case.

However, in critical economic sectors, those with a significant portion of the total workforce or with structural importance to an ever-growing economy in the North, emissions have either stagnated or are rising. Agricultural emissions in 2018 are higher than they were in 1990 and have risen by 5% between 2010 and 2018, including a rise in almost every year in the last decade[16]. Total transport emissions are 1 million tonnes greater in 2018 than in 1990, and have been stubbornly high at around 4.5 MtCO2 over the last decade.

But more importantly, in the face of the climate science, the obsession with economic growth, of which transport and agriculture are essential components, has made achieving a necessary rate of ‘decoupling’ between the rates of GDP growth and carbon emissions reductions in the North next to impossible.

This is important – though emissions in the North have fallen somewhat, continuing economic growth placing more demands on energy and resources will frustrate and negate decarbonisation gains, ensuring that growth and emissions will not diverge fast enough to tackle the climate crisis.

Work published Hickel & Kallis (2019), revising and building on a major study by Anderson and Bows in 2011, forecast that in order to have a 50% chance of limiting global heating to 2 degrees, high income economies, like the all-Ireland economy, must reduce emissions by 12% annually.

For high-income states to continue to grow their economies at a 5-year average of 1.86%, the authors estimate that a rate of decoupling between GDP growth and carbon emissions of 15.8% is required.

For the North of Ireland, the five-year average rate of real economic growth in the North between 2014-2018 is 1.62%. Therefore, to have a punters chance of limiting global heating to 2OC, and to continue to simultaneously grow the economy, an annual rate of decoupling of at least 14.7% is required.

As Figure 4 makes abundantly clear, at no point in the last decade for which comparable data is available has this rate of decoupling been achieved. In fact, in a staggering 7 of the 11 years examined for this piece, the divergence of the rates of growth and emissions reductions has been less than 2%, with some years showing no split and even ‘recoupling’, i.e. rising emissions and economic growth in the same year. 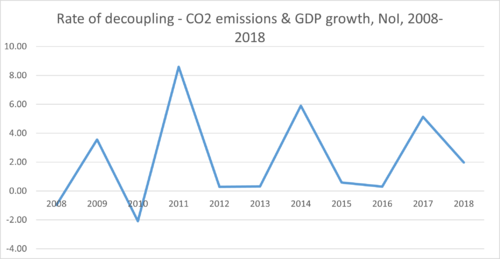 There is a clear and inevitable conclusion here, therefore. In the face of looming climate catastrophe, which requires a rapid transition across the world to a net zero carbon economy by at least 2050, we simply cannot continue fetishise economic growth as the sole indicator of economic performance.

Refusing to change course will continue to thwart any, already meagre, attempts towards a rapid shift towards sustainability. In the North of Ireland, the trend is clear – we are unable to endlessly grow our economy and also contribute towards our moral and political climate obligations, as dictated by the science.

The good news is, this can be the beginning of a discussion for a shift towards a steady-state and de-growth economy, based on redistribution, economic democracy, mental and physical wellbeing, social protection, and, above all, a slow and gradual return towards ecological stability and a safe climate future.