Time is running out

There remains only a small window of opportunity to enact the necessary climate action required to avoid catastrophic climate change. Human activities since the beginning of industrialisation have led to an average increase in global temperatures of 1oC. A further half a degree rise in global temperatures would have severe consequences for human health, livelihoods, food and water security and economic growth, with the poorest countries, and communities across the world dependent on agriculture and fishing, vulnerable to the most severe impacts. Achieving the goal of the Paris Agreement, and stabilising warming at 1.5oC must be an imperative of governments seeking to avoid untold human suffering. 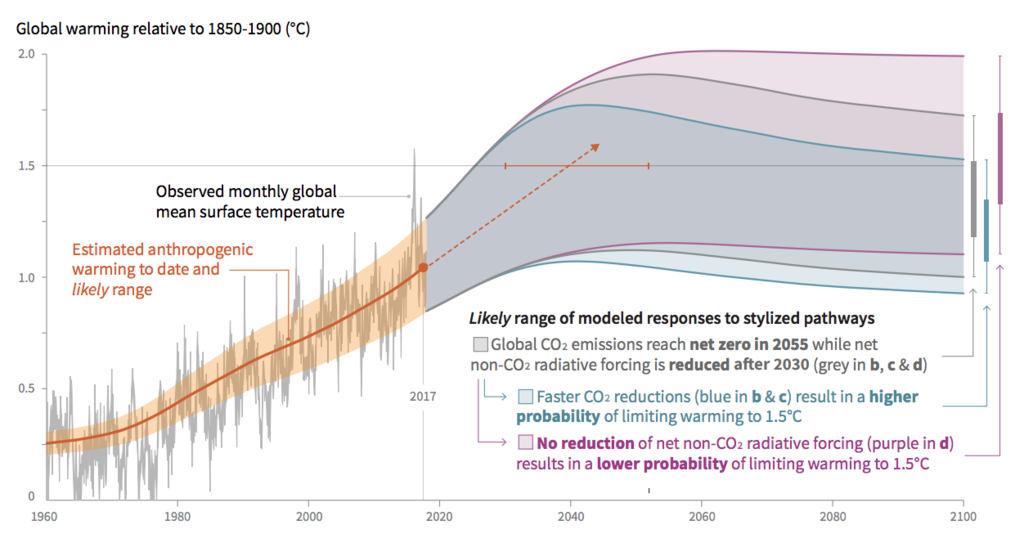 The complexities of global regulation

These estimated reductions, applied equally to countries based on their 2010 emissions, do not make allowances for considerations of equity and historical responsibility for emissions. The challenge of emission reductions is a global challenge, and it stands to reason that countries which have historically benefitted from fossil fuel based development and thus benefitted from consequent economic growth, have a larger historical responsibility, greater capability to act and a moral obligation to support countries which have not benefitted similarly in making the transition(WRI).

Inequality between countries matters deeply in the context of climate change. Operationalising equity in the global response to climate change has been a fundamental point of contention in multi-lateral negotiations under the United Nations Framework Convention on Climate Change (UNFCCC) since its inception in 1992 (e3g). There have been many efforts to articulate what constitutes a fair global response to climate change. Perhaps the most substantial is the Equity Reference Framework (ERF) which forms the basis of the Civil Society Review of climate commitments made under the UNFCCC. The ERF offers a range of variables to enable varying degrees of progressivity and urgency to be incorporated into emission reduction projections.

Using the most progressive and urgent parameters within the framework, a dramatically different picture emerges for Europe and Ireland. By this, Ireland would need to achieve zero emissions by 2024 and Europe achieve the same by 2025. Furthermore, the EU would need to directly support the reduction of emissions in developing countries to the tune of 3,249 Mt CO2-eq by 2030 – almost an equivalent level of emissions that which is currently emitted by the 27 EU states.

The role of politics

Ultimately, despite the clarity of the science, legally required emission reductions depend on political will to act on climate change. In this regard, the current EU target, determined by the EU’s Nationally Determined Contribution (NDC) under the Paris Agreement is a 40% reduction by 2030 against a baseline of 1990. This amounts to a mere 14% reduction versus the latest available emissions data from 2018.

This mathematical sleight of hand obfuscates the primary goal of securing a stable climate and ultimately falls well short of the scientific target required to avert climate catastrophe, never mind the target required once equity is considered. It is anticipated that the EU will, over the lifetime of the Paris Agreement, progressively increase the ambition of this target. To bring the NDC target in line with the IPCC figure of a 45% reduction vs a 2010 baseline, the EU should target a 60% reduction vs 1990 levels. Given that, for Ireland, emissions increased between 1990 (EU NDC) and 2010 (IPCC SR1.5), achieving the 40% reduction in the EU NDC requires a 50% reduction on current levels, and a 60% decrease in a future EU NDC would require a 66% reduction on current levels, in the absence of effort sharing.

The ramifications of Covid-19

For the purposes of survival, it is assumed that the laws of thermodynamics take precedence over EU law, and thus the emissions reductions set out in the IPCC’s Special Report on 1.5oC should be adhered to. The scale of these reductions is brought into sharp relief by the impact of the COVID-19 crisis on global emissions. At the time of writing, several dozen countries have implemented stringent measures to prevent the spread of the virus which have served to drastically reduce commercial and industrial activity, the use of transport and the use of electricity. Analysis suggests that these measures will result in emission cuts for 2020 in the region of 2,000m tonnes of CO2 (MtCO2), equivalent to around 5.5% of the global total in 2019 (Carbon Brief). This is commensurate with the required annual reduction for Ireland and the EU in order to meet the targets set out by the IPCC and speaks to the transformative changes necessary to achieve a stable climate. However, such changes must be achieved without the enormous interruption to society caused by the global response to COVID-19, which would obviously be unsustainable as anything other than a short-term emergency response.

Sean holds an B.Sc in Applied Physics from Dublin City University and an M.Sc. in Development Practice awarded by Trinity College Dublin and University College Dublin. Prior to joining TASC, Sean worked as a Policy Officer with the Mary Robinson Foundation – Climate Justice for five years. During this time he engaged with the negotiations leading to the Paris Agreement and the 2030 Agenda for Sustainable Development. He also led the Foundation’s work on intergenerational equity. Sean spent five years working in the private sector, as a catastrophe risk analyst with Renaissance Reinsurance. He also spent 2 years working in a hospice in Kolkata, India, and worked with the Environmental Protection Agency in Sierra Leone building the agencies capacity in Geographic Information Systems.