Looking toward a more collaborative future

PTW has not worked

New thinking about welfare policy is now required. With unemployment back challenging historically lows, the early analysis of the Irish welfare reforms under the Pathway to Work (PTW) policy initiative suggest they have not worked as intended. All of this is happening just as the international consensus on Active Labour Market Policies (ALMPs) is breaking down. So, if we continue with PTW and ALMPS we will be doing so without an evidence base and such a foolhardy project would be either political-marketing or an ideological campaign against the poor.

Irish welfare policy was comprehensively changed under the 2011 PTW initiative- moving away from what had been criticised as a passive system, to one that embraced much of the ‘international best-practice’ of ALMPs. The measures included- a work-first approach with mandated engagement with the public employment service; measures aimed at ‘incentivising’ unemployed people to take up any job; incentives for employers to hire the unemployed; an emphasis and extension of sanctions to drive behavioural change;as well as the merger of the public employment service with the national training agency (FÁS) and the community welfare service formerly run by the health boards/HSE. Of these changes, perhaps the most superficial change was the rebranding of the new merged office- away from the authoritative 'Office of Social Protection' and nurturing FÁS brands to the more vacuous 'Intreo'.  For many users we encountered in the course of our research that transformation was the interpreted as the withdrawal of the promise of social protection. 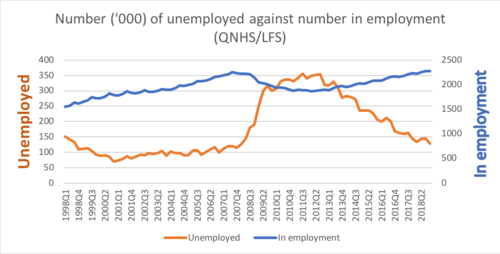 PTW was introduced in 2011 after three years of dramatically rise in unemployment and intense international scrutiny of Irish welfare policies. In the politics of the day PTW framed asmeasures that would protect core payments. The system had been supporting 70,000 and 115,000 thousand people a year in the decade before the crash, most were frictionally unemployed individuals transitioning from one job or to another. Indeed, there was a remarkable low level of long-term unemployment- at one stage there was just 20,000 persons unemployed for over a year. 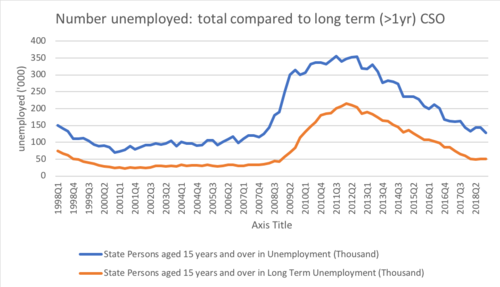 The PTW policy initiatives were an un-untanglable mix of political marketing for the domestic voter and attempts to impress foreign lenders - what David McWilliams termed the “good room” policies. Certainly in 2011, with unemployment cresting 16% active labour market policies sold well. Indeed there are few more memorable or distasteful political marketing campaigns in recent Irish history than “Welfare Cheats cheat us all”. With national unemployment rates at 5.6% (Feb,18) political attention is firmly focused on housing and health, and Ireland is back in the international good books.

Back in 2011 an unusual consensus had emerged in international policy around ALMPs. They are a complex policy mix that have strong left, right and third way support- not unlike universal basic income garners now.

WUERC (Waterford Un/Employment Research Collaborative) ran an Irish Research Council futures welfare workshop just over a year ago and what was remarkable was how settled the policy prescription from Denmark, France, Germany, the UK and Ireland was- no longer was there three welfare paradigms of Scandi, Anglo-Saxon and Continental, they had morphed into one. Rights and responsibilities, work-first, activation, engagement, sanctions, outsourcing were all lashed together as the cure-all for unemployment. What was also striking was the collection of welfare academics were all reporting, to a greater or lesser extent on the failure of these policies.

The Evidence on ALMPs

Since then a significant body of work has emerged (of which we are a minor contributor to) that shows empirically that ALMPs do not work as advertised, are more an ideological programme than a set of evidence-based policy, are actively cruel to those subjected to them and are expensive. The ERSI, the research producers most closely associated with Irish ALMPs in a recent review of some of the PTW approaches murmured that the policy does not work, similar data has emerged more full-throatily from the Comptroller and Auditor General annual reports, and from the various researchers in Ireland who take an interest in unemployment and welfare- most notably- Michelle Millar, Michelle O’Sullivan, Stephen Gaphney, Mary Murphy, Fiona Dukelow and Kenny Doyle. Indeed most of these scholars have pointed out the larger health and economic cost of cutting holes in the social safety-net through unsympathetically mixing social protection with activation and conditionality.

Working 'with' rather than 'on' the unemployed

So active labour market policies (ALMPs) are no longer recommended like eating more vegetables, attracting FDI, stopping road deaths or building a children’s hospital - pure and good things on which we have a strong national consensus. Their continuation, particularly in their harshest, most coercive measures- sanctioning the unemployed, must be fully understood as an ideological project of punishing the poor. New thinking is needed, particularly the new-old thinking of returning to human-capital centric approaches that support unemployed people with information and options that work for and with the unemployed; an approach that served both the unemployed and the Irish economy so well in the past. Equality of access to higher education would be a good place to start, supporting the burden of caring roles in our society would be another. All of this needs to be done with empathy for the practical reality that the approach to administering unemployment is where policy and political marketing collide. While the policy consensus has circled back to human-capital centric approaches, no one has addressed the political marketing challenge of a more subtle and supportive approach to working with the unemployed rather than working on the unemployed.

It is a good time to be thinking about what comes next in Irish unemployment policy because what we are doing is not working.