As I outlined in the first part of this article (see link here), the housing and homelessness crisis is no ordinary crisis. This is not a temporary blip. The Irish housing system is in a state of ‘structural ‘shock’. Home-ownership rates have collapsed to levels not seen since the 1970s. One in five households now live in the private rental sector where they experience unaffordable rents and the constant threat of eviction. Homelessness is at record levels. There are potentially 20,000 home owners in mortgage arrears facing repossession and eviction. But solving this crisis is not rocket science. There are real solutions that could be implemented if the political, societal and institutional will existed. At the very core of solutions is the requirement of the state to shift back to playing a central role in supplying social and affordable housing for a broad range of households ranging from the most marginalised to middle income workers and households. As the Ombudsman for Children explained forcefully and correctly in his recent report:

“The State needs to move away from prioritising financial interests that view housing as a commodity and instead recognise it as a social good, offering children and families a secure place to live in dignity”.

If we look at countries that have much better housing outcomes such as Austria and Denmark the solution is clear and straightforward –provide much higher levels of social and affordable housing and provide it for a broad range of income groups. This is so that it is not stigmatised and has a mix of income and household types in it creating sustainable communities and broad societal support for social housing. For example, in Denmark social housing is 20% of all housing stock and co-operative housing is 7%. Housing is considered a fundamental right and a central part of the welfare state and citizen-state contract. In Ireland social housing is only 9% of housing stock and we have no significant co-operative housing sector (see graph below). 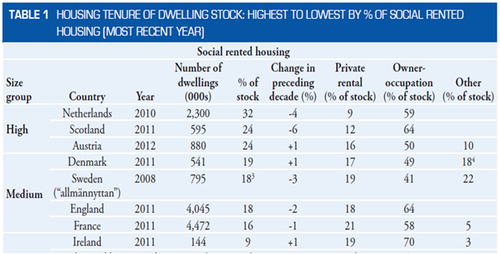 At the upcoming TASC conference (details) a keynote speaker is Richard Wilkinson. The idea that was central to his (and his co-author, Kate Pickett) ground breaking book – The Spirit Level-Why Equality is Better for Everyone - is worth considering in relation to Ireland’s housing crisis. The central idea is that in more unequal countries it is not just the poor that are worse off – but everyone is worse off in terms of health, crime, social cohesion, and so on. We can see this very clearly in relation to housing in Ireland. As housing inequalities have worsened – it is making everyone worse off.

As I outlined in “Home or wealth generator? Inequality, financialisation and the Irish housing crisis” (Hearne, 2017), the Irish housing system is now making a major contribution to increasing inequality in Ireland. The (Global and Irish) wealthy ‘rentier class’ – the global investment funds, and property investors and vultures are increasing their wealth exponentially from the poor, young and low and middle income workers, firstly in the labour market through lower wages and precarious work, secondly, in the sphere of ‘social reproduction’, through higher rents and mortgages, and thirdly from the state in the form of lower taxes and higher subsidies. The property-finance nexus is also exerting an undue influence over government policy, such as social housing as outlined in the first part of this article, thus adding to the inequality of power and undermining of democracy.

The housing crisis now affects everybody in Ireland, from the economy (companies becoming reluctant to locate or expand in Ireland because of a lack of affordable housing for workers and the increasing cost of housing necessitating higher wages), to families with adult children living longer at home and longer able to access a home in their community leading to an overall reduced sense of well-being and quality of life. Our sense of pride in our country is being replaced by a feeling of shame at the levels of homelessness when we see and hear about children’s lives being destroyed growing up in emergency accommodation. While a large chunk of the social capital of our nation – emigrant children who have moved abroad – are increasingly finding it difficult to return from overseas because of the lack of affordable housing. It is also becoming more difficult to build cohesive communities as renters cannot put down roots because of a deep sense of insecurity due to precarious work and precarious housing including constant short term leases and fear of eviction (TASC, 2018). There is a corollary to this – in more equal societies everyone does better and, as it would be with housing – if we can provide greater access to affordable secure housing we (our society and economy) will all be lifted.

There is an opportunity to make a real improvement in quality of life in Ireland amidst this crisis. If a visionary approach is taken through innovative housing solutions, we could actually address three of our major societal challenges.

Rising inequality, citizen discontent and climate change are the three major global and domestic crises. They often seem unrelated.  But if we take a new innovative approach to solving the housing crisis we can help address these social, environmental, and economic crises too. We need to start by re-thinking the role housing plays in our societies and economy. We need a new way to provide affordable homes for the twenty first century. Bold action is required. For example, we need a new public, not-for-profit, Irish Affordable Homes Company (think big like the ESB rolling out electricity) to build twenty thousand affordable homes per annum for a mix of incomes (well designed, and planned).  This company would involve citizens and communities in building affordable homes using sustainable methods, providing quality jobs on public land thus helping solve the housing crisis, inequality, climate change and citizen engagement.

There is a real opportunity in the coming Budget to mark the beginning of the end of this crisis. If the government, for example was courageous and decided not to cut taxes (as people sought in the 2016 election – for investment in public services and housing rather than tax cuts) and reversed its proposed ‘rainy day’ fund of €1.5bn per annum and used this funding to increase capital spending (not current spending on private landlord subsidies) to €2.3bn per annum in order to dramatically increase the supply of real social and genuinely affordable housing. It should also hold a referendum to enshrine the right to housing in the Constitution as recommended by the Constitutional Convention in 2014, in order to provide an overall guide of housing policy that prioritises the delivery of home as a right and basic need.

Of course, the longer the lack of supply goes on the higher the prices for the vulture land hoarders, the higher the rents for the Real Estate Investment Trusts, the more state subsidies to private landlords – so it suits the private developers and landowners to sit back and wait – as the crisis worsens their profits rise.

Housing’s key role as central to people’s fundamental sense of well-being, the requirement of basic need of shelter, as a home to be protected in, to raise and nurture individuals and family with dignity, as a place for quality living within a wider community, and its role in providing sustainable development have been undermined and replaced by its treatment under neoliberalism as a financialised asset which places its primary value as its use as commodity exchange for investors. Unless we take a different approach this will have profound implications for the coming decades in Ireland – not just in terms of the failure to meet the basic housing need of our populations – but wider societal inequality and cohesion, economic development, environmental sustainability and consequently politics.

TASC (2018) Living with Uncertainty: The Social Implications of Precarious Work