Part 1 of this blog examined whether and to what extent the trajectory of Irish property prices was driven by changes in underlying fundamentals. We found that not only have property prices exploded globally since the 1990s, but that this was the result of a macroprudential/regulatory-induced surge in credit. Given that, and the increasingly dysfunctional character of Irish and global property markets since then, we found little reason to suppose that recent developments reflected fundamentals.

Here we elaborate on the point and examine the issue of affordability, particularly in relation to other advanced and European countries.  Again we refer to a recent ESRI paper which argues that Irish property prices are ‘quite affordable’ by international standards. To this end the paper utilises an international database on house prices from which a standard measure of affordability may be calculated, the ratio of house prices to disposable income. Figure 1 below reproduces the graph as it appears in the paper. 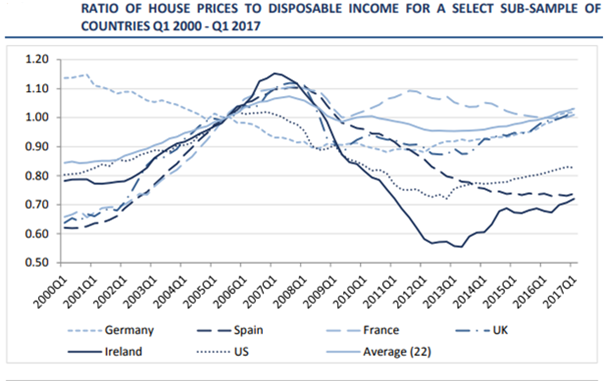 Figure 1: Affordability based on ESRI/FED database

As can be seen, it appears Irish housing is not particularly expensive. Importantly, it includes the disclaimer ‘It is worth noting that the index is based on the movement from a common base of 100 in 2005’. That is to say, it does not show that Ireland’s affordability is high by international standards in an absolute sense but rather that Irish affordability since 2005 has grown less than the comparator countries. This is crucial.

But how sensible is it to use 2005 as the base, as both the FED database and the ESRI paper on which it is based do? Not very in my opinion. As we saw last time, property prices exploded in the early 1990s and this explosion was historically unprecedented. Moreover, the main reason for the relative lack of growth in unaffordability overall since 2005 is the post-crisis collapse in prices. Irish, Spanish, and other bubbles were in full swing in 2005 such that for a certain subgroup of countries a collapse was inevitable. 2005 provides an unrealistic base upon which to measure prices. If 2013 were used as a base, for instance, a different picture would emerge.

Below we repeat the FED/ESRI exercise but use 1990, the period before the explosion in prices, as the base year. As can be seen, a very different picture emerges. Of the countries displayed, Ireland now becomes the most unaffordable. By this measure and at current levels of disposable income, Irish prices are overvalued by about 30%. 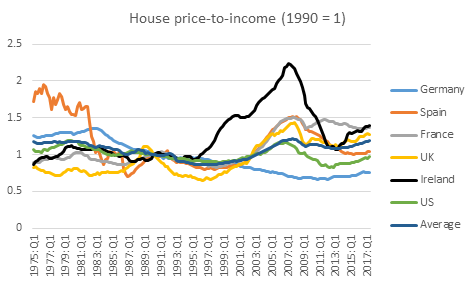 Of course, we can cut through the subjectivities of what year to use as base by looking at Eurostat household consumption figures. While a recent Irish Times article showed that housing costs were below EU averages, housing costs, as the article recognises, includes things such as expenditure on food and clothing. Looking at just accommodation (actual + imputed rent) in Table 1 below, it is apparent that Irish household expenditure is well above EU norms. Only four EU countries have higher accommodation costs, and if 2017 trends are allowed for, that very possibly falls to two (Denmark and Sweden spend 20.4 and 19.8 respectively). As is well-known, household averages obscure the fact that younger people and people living alone are likely to spend a considerably higher proportion of their income on housing.

To sum, housing in Ireland is clearly not affordable by European standards – we have some of the most unaffordable housing in Europe. There is a significant degree of arbitrariness in adjudicating what constitutes a fundamental factor and whether or not a country’s housing system is responding to said fundamentals. There is a strong case to be made that housing dynamics in Ireland (as elsewhere) are divorced from where they ought to, or might be. None of these trends, however, are inevitable.