Why is Ireland such a high-cost country?

In Ireland, the price level of consumer goods and services are 40% above the EU average. Why is this the case?

Our high prices are almost entirely due to the high cost of services (which includes renting a home) rather than goods (figure below). The price of goods in Ireland is largely in line with other European countries, with the exception of alcohol and tobacco. Since 2003, goods prices have improved significantly relative to our European neighbours due to the arrival of large European retailers, improved logistics linked with our better motorways, larger shop sizes, and greater competition from online retailers. 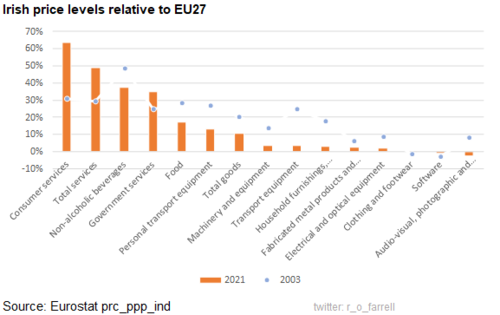 So why are services so expensive? The main reasons are high rents; a lack of competition in some sectors; lower subsidies and higher VAT than elsewhere; and with Ireland’s wage level playing a more minor role than might be expected. 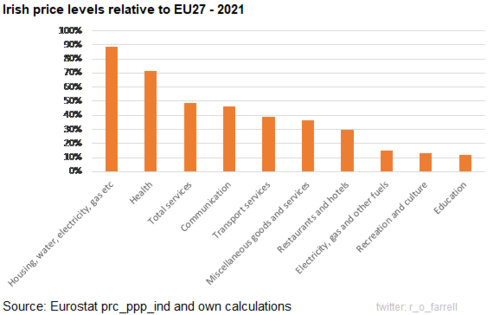 Unsurprisingly, the main category driving up the cost of services is housing, as renting is considered a service (Figure above). It is well known that renting a home in the open market is extremely expensive. It can be argued that the weighting given to rent is too high. When compiling the statistics, buying a home is considered an investment rather than a consumer expense, so mortgage costs are not included. To make up for this, owner occupiers are treated as renters. This can give an exaggerated figure for housing costs if renting is more expensive than owning a home. In 2015 to 2016 people were asked how much they spend on mortgage interest and rent, and then the imputed figure matched closely with the figure people actually spent. However, it has likely drifted since then as rents soared.

Ireland does not subsidise services as much as in other countries. This can clearly be seen with transport services costing 40% above the EU average. In Paris, public transport is heavily subsidised, and €75.20 will allow you use all public transport in the city for a month. In contrast a Dublin Rambler ticket is €132 and only covers the bus.  Other services like childcare tend to receive higher subsidies abroad, as does healthcare. There is no such thing as a free lunch, and the flip side of this is that Irish workers keep a greater share of what employers pay them as cash. Irish VAT is also a little bit higher than in most other countries, which pushes up our price level by a small amount.

A lack of competition in some sectors can keep prices high. Expensive insurance and legal fees feed into higher costs even for businesses that face a lot of competition (such as in hospitality). Perhaps the most visible sector where a lack of competition keeps prices high is communications. While the problems regarding rural broadband get attention, Ireland has an urban broadband problem with expensive internet. This contrasts with France, where €40 a month gets you a bundle including broadband, television, landline, and mobile phone with 20GB data.

Do high wages also push up the cost of Ireland’s services? They do, but by less than one might expect. It is well known that services such as getting a haircut are far cheaper in Eastern Europe where wages are also lower. In countries with highly productive export sectors, wages are pushed up in that sector, which in turn leads to higher wages in the less productive labour intensive sectors (referred to as the Balassa–Samuelson effect). Using data from 2019 to avoid the Covid related distortions, prices in Ireland’s hospitality sector are 23%  above what one would expect given labour costs (wages plus costs to employers of hiring a worker such as employers PRSI) in the sector alone. Other costs, such as VAT and insurance play an important role in pushing up the price of a night out. 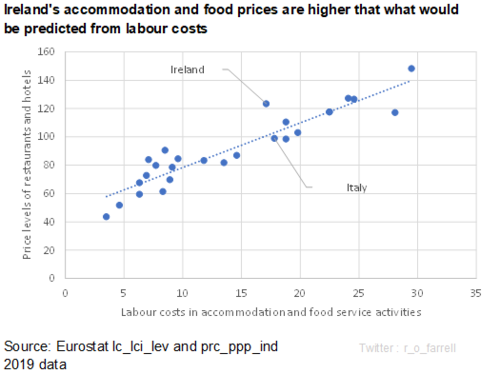 A final issue which I have avoided is the high price of alcohol and tobacco. This is due to high taxation. It is probably best not seen as an economic problem but as a choice made by the government, and those who vote for them. If we wish we can have EU price levels for these overnight if a change is made. Reducing rents and increasing competition in the legal profession faces far greater hurdles.