We welcome the Minister for Further and Higher Education Simon Harris’ plans to investigate the work done by PhD researchers in Irish universities[i]. His intention responds to the growing public awareness about the expansion of precarious employment in academia and its detrimental consequences for individuals, families, and institutions.

Underpayment and wage theft may look like a good short-term saving. Still, the over-reliance on contracted and temporary staff for teaching and essential student services endangers academic excellence and has damaging long-term effects on the sector (Cush Report 2016, Murgia and Poggio 2019, EASA 2020). It also undermines efforts to accelerate gender equality and increase diversity (O’Keefe and Courtois 2019, Ivancheva et al. 2019).

One of the reasons why tackling precarious work in academia is so difficult relates to the lack of data. Neither the Higher Education Authority (HEA) nor the higher education institutions (HEIs) have a complete picture to develop evidence-based policies.

The HEA defends its ignorance by stating that universities have institutional autonomy, a spurious argument since it is responsible for overseeing working conditions in HEIs. Because the hiring of temporary staff or the distribution of teaching is done at the school or equivalent level, senior managers and human resources do not monitor the different (and often unfair) working arrangements. This was made clear in the responses given by NUI Galway to Freedom of Information Requests inquiring about unpaid teaching in 2020. The university claimed not to have a centralised record of the information, demonstrating how the issue is intentionally overlooked and swept under the rug.

The effort to collect and analyse data has so far wholly depended on the initiative of PhD and postgraduate researchers. Indeed, organised as a collective, PGWA has continually investigated the real effects of precarious work in NUI Galway.

The first initiative was an exploratory survey in October/November 2018 that focused on postgraduate researchers from the College of Arts, Social Sciences and Celtic Studies and College of Business, Public Policy and Law. The 43 respondents-sample showed distressing results. For instance, that International PhD researchers are more vulnerable to exploitative working conditions, reporting having done more unpaid teaching than their Irish colleagues. The survey also exposed substantial differences between disciplines, with smaller or less-resourced units more inclined to rely on precarious and unpaid work. The situation is further complicated because NUI Galway treats its post-grad students differently according to their scholarship status. Of the respondents, 30% had taught during that semester, providing 1098 hours of teaching for NUI Galway. At least 335 hours of this work was unpaid. The result refers to only two of the then six colleges in the university during one semester, indicating an enormous problem in the sector.

PhD researchers in NUI Galway on the Structured PhD course have been pressured in recent years to provide 120 hours of unpaid teaching ‘contributions’ a year. This intention was made clear by including a 120-hour unspecified ‘contribution’ being enshrined within the postgraduate guidelines. These guidelines were, in turn, included in teaching contracts. Surreptitiously, the work contracts justify unpaid labour, that is to say: wage theft.

The scholarships provided by the university, and other entities, constitute roughly half the minimum wage and barely cover Galway’s high cost of living, particularly considering the high rents caused by the housing crisis. This unpaid, or poorly paid, teaching adds a further financial burden to many postgraduate researchers already struggling to make ends meet. The survey results and the living conditions of many of us, propelled PGWA to start a campaign in 2019 which argued for no postgraduate work without wages and to remove the 120 hours contribution from the guidelines.

Another issue for concern is the hiring of researchers to perform administrative or management work. The arrangement is widespread in NUI Galway and normalise precarity as people face rolling provisory contracts with no opportunity for promotion.

In April 2020, PGWA set up another survey to gauge the main worries and concerns faced by PhD researchers due to the impact of Covid-19. The 45 respondents described challenges related to the disruption to research trips/fieldwork, lack of access to research materials and library resources, and challenges to productivity within the home environment. Conferences being canceled and mental health challenges also came up, while a few researchers raised technology issues and caring responsibilities. Challenges associated with teaching online were the most frequently cited concern. The financial implications of changed semester dates, reduced teaching opportunities, and concerns about providing extra support to students via blackboard and email were also mentioned frequently. The supports that would be most welcome from the university related to clarity around the reopening of the workspaces and library, guaranteed payment for all teaching, clear information about arrangements for next semester and the need for scholarship extensions. Technological supports for working from home, raising the stipend, and online therapeutic supports also got a couple of mentions each.

Recently, we carried out research to evaluate the differences between PhD students in Ireland and other Western European countries. To this end, we collected data from various national and European sources and analysed how the PhD stipend, or salary in countries where PhD students are considered public servants, corresponds to the net minimum wage of each country. Surprisingly, the only country in Europe where a PhD student is paid less than the net minimum wage is Ireland. What is more, Ireland is the country with the highest rent rates and tuition fees in Western Europe. 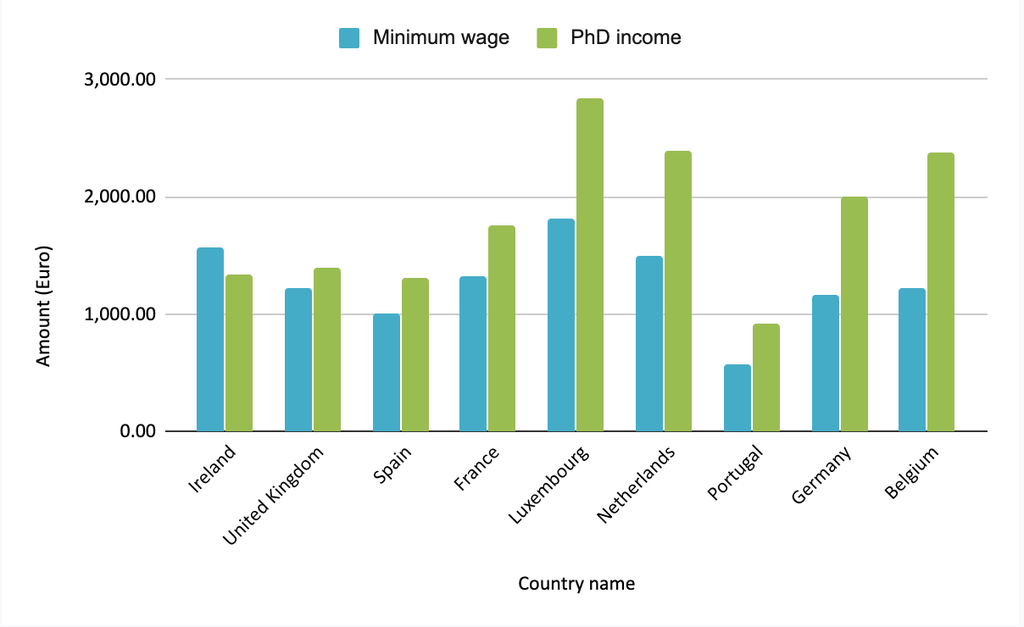 PhD students in Ireland who are paid less than the minimum wage also pay the highest fees and rents in, most probably, in a shared place. In contrast, students in other European countries have more favourable living conditions and are paid more than the minimum wage.  For more information, please check the collected data at https://sinaahmadi.github.io/posts/phd-in-ireland-vs-europe-a-comparative-overview.html

The institutional surveys and the international benchmarking demonstrate the urgent need for the HEA to act concerning HEIs exploitation of precarious work. The lack of data is especially concerning. Universities’ autonomy should not be used to hide exploitation. Greed can not be the force guiding higher education.

Organised with postgraduate alliances in other institutions, we started a national network (PGWAI) and we are continuously promoting awareness-raising campaigns. We have also directly contacted Minister Simon Harris to seek a seat at the decision-making table.

Any policy to tackle precarious work in academia needs to acknowledge PhD and Post-Doctoral researchers' effort and expertise. Direct participation of the community in gathering data, analysing the evidence, and designing policy is the only way to assure the decision-making process is transparent, sustainable, and equitable.

If you are concerned with precarious work in Irish academia, reach out to us

Want to set up a local PGWA? Send us an email: galwaypgwa@gmail.com

Cush, M. (2016). Report to the Minister for Education and Skills of the chairperson of the expert group on fixed‐term and part-time employment in lecturing in third-level education in Ireland. Retrieved from https://www.tui.ie/_fileupload/Cush%20Report.pdf

Murgia, A. and Poggio, B. (2019) Gender and Precarious Research Careers: A Comparative Analysis. Routledge: London and New York.