The much-anticipated Climate Action and Low Carbon Development (Amendment) Bill 2020, published this week, was to be a significant moment in the story of Ireland's contribution to the global fight against climate breakdown. From an initial reading, and in absence of the substance of revised plans and carbon budgets required by the bill, it is difficult to ascertain if it is the transformative step-change many hoped to see.

There are certainly positive signs of progress, perhaps most significantly the introduction of sectoral carbon budgets, to be proposed every five years by a more robust Climate Advisory Council. If adequately implemented, monitored, and enforced, these budgets will help to rapidly reduce Ireland’s emissions. Similarly, the strengthening of the oversight role of Oireachtas Climate Action Committee offers an opportunity for genuine scrutiny of progress towards our national targets.

However the bill comes up short in terms of targets. The commitment to transitioning to a “climate resilient and climate neutral economy by the end of the year 2050” would be a welcome addition to Irish law, though it is hardly ground-breaking. EU policy already calls for “climate-neutrality” by 2050, and, based on the global nature of the climate crisis, this target is itself unambitious.

The Paris Agreement, which calls for net-zero emissions by the latter half of the century, explicitly recognises that this target must be met on the basis of equity, meaning developed countries should be reducing emissions faster in order to allow poorer countries to support their citizens realisation of the right to development.  Other developed countries have expressed more ambitious net-zero goals - Austria (2040), Finland (2035), Iceland (2040), Norway (2030 with offsets), and Sweden (2045) – though only Sweden’s commitment is enshrined in law.

Those hoping to see Ireland expressing the ambition of a global leader on climate would have been more enamoured with a commitment to a specific climate target by 2030. This is the period covered by the Nationally Determined Contributions under the Paris Agreement. Instead, the bill leaves this up to the discretion of the sitting minister, requiring an annual update to the climate action plan, a national long-term climate action plan at least every 10 years and carbon budgets at least every 5 years.

Discussions around the Programme for Government indicated a willingness to set a target of 7% average, annual emissions reductions to 2030. Unfortunately, this is far from commensurate with the new target adopted by the EU Parliament, which aims for a 60% reduction in the bloc’s reductions by 2030, as is illustrated in Figure 1 below. Due to the mechanism for increasing ambition under the Paris Agreement, it is likely that the EU’s 2030 target will be revised upward once more in the middle of this decade. By omitting a minimum 2030 target for Ireland, this bill misses out on an opportunity to set a course for genuine climate ambition.

The lack of a commitment to an evidence based 2030 target is of greater concern given that one of the coalition partners, Fine Gael, is a member of the European People’s Party which abstained from the EU Parliament vote on account of the new 60% target being “too ambitious”. 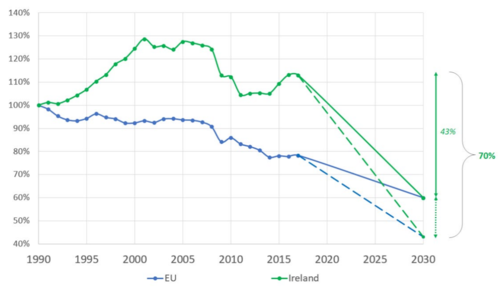 Figure 1: Greenhouse gas emissions from the EU-28 and Ireland alone, normalised to 1990 levels – the baseline year for the EU NDC under the Paris Agreement. As a whole, EU emissions have reduced between 1990 and 2017 by more than 20%. Over the same period Irish emission have risen - in 2017 Ireland’s emissions were 10% higher than in 1990.  An average annual reduction in emission by 7% in Ireland between 2021 and 2030 would cumulatively reduce emissions by 52%. This would have been sufficient to meet the previous EU target (40% below 1990 levels). Based on the new target, Ireland needs to reduce emissions by 70% versus 1990 levels. (Source: www.eea.europa.eu/data-and-maps/data/data-viewers/greenhousegases-viewer)

It is welcome that, at the launch of the climate bill, the rhetoric of the Fianna Fáil,  Fine Gael and Green Party leaders reflected an awareness that climate policy, by its transformative nature, has the potential to undermine wellbeing and exacerbate inequality. However, in its current form, the bill itself does not reflect this awareness. There is an undefined reference to “climate justice”, along with a list of other concepts and documents which the government will “have regard to” when performing their duties under the proposed act. Left undefined, this provision is meaningless.

The same list highlights another concern – a primacy of “delivering the best possible value for money” while maximising benefits to society “as far as practicable”. It is reasonable to question whether such a provision is necessary at all in a climate bill. Faced with the existential challenge of climate change, traditional accounting measures will not suffice – they are neither prudent nor practical. Assessing projects on a value for money basis is likely to miss out on potential on transformative social benefits which climate action could bring. Central to advancing climate justice is a commitment to share the benefits and burdens of the solutions to climate change equitably – this is not achieved through a “value for money” approach.

Finally, the bill makes no reference to ensuring a Just Transition. In calling for enhanced ambition on the floor of the European Parliment yesterday, EU Commissioner Frans Timmermans said "Without a Just Transition, there will just be no transition". Unfortunately, the right to participation in environmental decision making, central to a Just Transition and guaranteed under the Aarhus convention, is seemingly omitted from this bill. The only reference to public participation is the option for the Minister to consult with members of the public “as he or she considers appropriate”. Such weak wording on consultations does not signal a shift away from the standard fare to allow for genuine bottom-up approaches that listens to workers and communities at risk of being stranded by the transition.

The bill focuses attention on the Climate Change Advisory Council and the government clearly envisages the council having a key role in shaping future policy and legislation. It is positive that the bill seeks to enhance gender balance in the make-up of the Council, and also makes space for an expert with “political sociology or ethics in relation to climate” in a new definition of required expertise for Council membership.

It would be good to see this language amended to go further – the Council should have significant representation of applied social scientists, who understand the lived experience of people living in precarious or vulnerable situations so as to ensure that future climate actions are designed with those furthest behind in mind. The Intergovernmental Panel on Climate Change (IPCCs) recognises the need for such expertise and, in their fifth Assessment Report (AR5), convened a working group to assess the vulnerability of socio-economic and natural systems to climate change. This working group made up one third of the IPCC’s effort on AR5 – perhaps a similar quota for the membership of the Advisory Council would be sensible.

The Climate Action and Low Carbon Development (Amendment) Bill 2020 does represent an improvement on what has come before. The challenge comes when reconciling what it contains with what is required to ensure fast and fair climate action commensurate with what is required to play part in the global response to climate breakdown. If Ireland is to become a leader on climate action, this bill must be strengthened through careful and considered engagement. This takes time and an openness to parliamentary scrutiny. The recent rushed passing of the Forestry (Miscellaneous Provisions) Act 2020 set a negative precedent in this regard. Hopefully, this time a different approach will be adopted. When it comes to something as urgent and all-encompassing as climate action, the Government should make haste slowly to ensure they get it right.

Sean holds an B.Sc in Applied Physics from Dublin City University and an M.Sc. in Development Practice awarded by Trinity College Dublin and University College Dublin. Prior to joining TASC, Sean worked as a Policy Officer with the Mary Robinson Foundation – Climate Justice for five years. During this time he engaged with the negotiations leading to the Paris Agreement and the 2030 Agenda for Sustainable Development. He also led the Foundation’s work on intergenerational equity. Sean spent five years working in the private sector, as a catastrophe risk analyst with Renaissance Reinsurance. He also spent 2 years working in a hospice in Kolkata, India, and worked with the Environmental Protection Agency in Sierra Leone building the agencies capacity in Geographic Information Systems.