This Budget could make a Real Difference

The Budget offers a golden opportunity to the Minister and the Government to tackle the housing problem once and for all.  The COVID pandemic has resulted in a most welcome change of philosophy in much of the world away from the obsession with balanced budgets and austerity policies over recent decades.  John Maynard Keynes had proposed a simple but revolutionary idea in his 1936 book, the General Theory of Employment, Interest and Money - that expenditure was a key element in dealing with an economic crisis and ensuring economic recovery.  Many governments used this guiding principle with remarkable success for several decades.  Since the 1980s,  however, political leaders such Margaret Thatcher and Ronald Reagan and our own government, heavily influenced by the “Troika” during the last crisis, abandoned this philosophy and turned toward austerity policies with disastrous consequences.  COVID had at least one welcome impact - it persuaded governments to see again what they had failed to see for decades – that significant borrowing and targeted expenditure is not only desirable but essential in times of crisis.

Our people have been crying out for years for a solution to the housing crisis.  It is now abundantly clear that this will not be achieved by relying almost exclusively on the private sector to provide homes for sale or rent - the so-called housing market  This reliance has led to volatile supply and escalating house prices and rents.   In 1975 the private sector built 18,089 homes. See Table 1.  By 2005 at the height of the mis-named Celtic Tiger 75,398 were built – many in areas throughout the country where they were not needed and ended up being demolished or as Ghost Estates.  In 2019 the private sector construction record was a mere 15,470 homes.  This clearly illustrates the remarkable volatility of private sector provision. The result has been a continuation of unaffordable house and apartment prices. The standard practice now is to hoard land, hold back supply and drip-feed over-priced homes to the limited number of purchasers who can afford them. Due to the lack of supply, house prices have increased significantly and are badly out of line with general inflation, the cost of building and average earnings and have been since 1995.

This is indeed a dysfunctional housing market.

Demand factors have also contributed to the increase in new house prices.  Over recent years Investment Funds encouraged by escalating prices and rents and the capital gains tax holiday saw housing as a no-brainer speculative venture. This is now a global phenomenon. They thus continue to push up the prices for first-time and other purchasers.  Similarly, Local Authorities and Approved Housing Bodies have been in competition in relation to the purchase of new and second-hand homes contributing again to price increases.  While well-intentioned, tax incentive schemes such as “Help to Buy”also increase demand and hence prices for first-time buyers.  The apparent gain in the tax allowance is written off in a higher price.  There are important policy implications.

Housing is therefore significantly over-valued, or more accurately, over-priced and this has been the case since 1995.  See Figure 1. 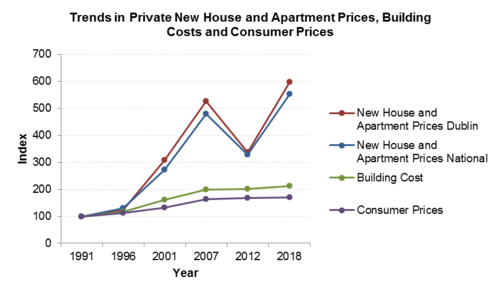 Source:  CSO and Department of Housing

Unfortunately, the private rented sector is equally problematic.  From the point of view of tenants, three specific problems can be identified in the private rented sector. These are: increasing and unaffordable rents, insecurity of tenure and often poor standards. The introduction of rent regulation and other improvements have been welcome but need to be carefully monitored and extended on a national basis. The recent trend by developers to sell off entire blocks of apartments to multinational companies rather than to private individuals is a serious cause for concern. These companies operate in a light-touch and even welcoming regulatory environment but this“crowds out”young aspiring purchasers. A range of international property investors have purchased and now control an increasing proportion of private residential accommodation. This points towards an emerging monopoly-type situation and further increases in rents. This sector is now seen as a separate“asset class”for speculation, capital gain and wealth creation. Companies with these objectives cannot be relied on to provide affordable and secure homes for our people.

Even a reformed private rental sector could not deal with the current housing crisis. Whether in relation to ownership or private renting, we have presided over the ‘commodification’ of housing where access to a home, depends almost entirely on ability to pay and pay dearly. This is a broken housing system.

A further cause of the continuing housing crisis has been the dramatic decline in construction of homes by local authorities, housing associations and other non-profit organisations over the last 40 years. See Table 1.  Since 2004 successive governments have turned to the private rented sector to provide social housing at a current annual cost of almost €1 billion. During the last 18 years alone, the government allocated almost €8 billion in rent supplement, the Residential Accomodation Scheme (RAS) and the Housing Assistance Payment (HAP) to private landlords for this purpose. Despite the considerable cost, not a single extra long-term home is gained in the process. While this support could be justified in the short term, there is now a strong case for phasing it out and replacing it with homes built and owned by the state.

It is essential to continue to reverse the alarming reduction in the direct provision of public housing. The proposal by the Government in Rebuilding Ireland to build 35,000 homes for rent and to refurbish many more represented a good start to redress this unacceptable situation.  However, the proposal to provide for a further 75,000 social housing tenants in the private rented sector should be re-considered.  There is now a golden opportunity for the government,  Local Authorities, Approved Housing Bodies and Co-operatives to play a much greater role in the provision of affordable, good standard homes with security of tenure in the interest of the common good. This should include a significant expansion of self-financing “cost rental” schemes for large numbers not eligible for social housing. A number of schemes have already been agreed in the Dublin area. Built on state land and charging sustainable rents, this would provide much-needed competition. Cost rental would enable people to postpone the purchase of a home for a time or indefinitely. The important impact would be a  reduction in house prices as well as rents in the private rented sector.  It is clear that we must reduce the unhelpful reliance on over-priced private sector housing.

The Budget offers an opportunity to tackle the housing crisis once and for all.  The following are suggested :

The Impact will be as follows:

A graduate of NUIG, he spent 11 years at Cambridge University where he lectured in economics and was a Fellow of St Edmund’s College. He returned to Ireland in 1980 to take up a post in Trinity College where he was later appointed Professor of Economics and Fellow of Trinity. He also served as Senior Dean and Bursar of the College.

He has published numerous papers and books, including Ireland: Land Politics and People; Ireland and the European Community; The Irish in America; Ireland and Britian since 1922; and Out of Reach: Inequalities in the Irish Housing System where he predicted the housing crash as far back as 2005.