from bust to buoyancy … to Brexit?

In a companion piece on the ‘Celtic Tiger’, I explained Ireland’s remarkable ascent from a poor EU country to one of the richest, with employment and living standards for workers doubling in just two decades. Growth occurred in three distinct phases—the first two based on sound economic policies but the third associated with procyclical neoliberalism.

Combined with the onset of the international crisis, Ireland’s crash—largely self-induced by bad policies inflating a bubble—was thus one of the worst in the world. Yet the subsequent recovery has been rapid and broad-based.

Gross national product (GNP) fell in 2008 in Ireland by almost 2 per cent, followed by a 9.1 per cent plunge in 2009. The budget that year sharply reversed the previous tax-cutting and deregulation—and it was brutal. Direct taxes were increased substantially and income levies introduced. Access to free medical treatment was narrowed, while college fees, water charges and other user payments were brought in. There was a further emergency budget in 2009 and another very tough one in 2010.

The neoliberal party was over and the hangover was pounding. The troika of the European Central Bank, the European Commission and the International Monetary Fund stepped in in November 2010, taking supervision of Ireland for three years—in return for loans, but with policies which inflicted much pain. Ireland received €67.5 billion in external loans under the terms of the programme. It proposed drastic cuts in social welfare, cutting the minimum wage by a substantial 12 per cent and increasing value-added tax, yet all the while maintaining the state's low corporate-tax rate.

Yet another tough Budget was introduced in January 2011, followed by an election. In March that year, a new government, allying conservative Fine Gael with Labour, was elected with a big mandate, but it was still under the aegis of the troika. Unemployment was soaring, up from 4.7 per cent in 2007 to 16 per cent in 2012.

GNP is a better measure for Ireland than GDP (gross domestic product), because multinationals’ transfers distort the latter. As the chart below shows, GNP fell from 2008 for four years but began to rise from 2012, with year-on-year growth soaring to 18.7 per cent in 2015 (when GDP rose by even more at 26.3 per cent). 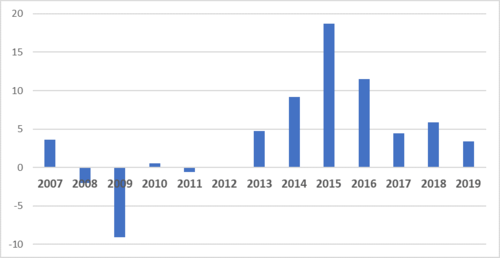 Ireland had the world’s worst crash. But it made a remarkable and rapid recovery as the above figures demonstrate.

Why such a rapid recovery? The Irish crash was not on the main-street economy but in finance, banking, construction and property, although this severely affected government revenue. Construction was worst hit, losing within a few years some two thirds of the 290,000 jobs attained at the peak. The rest of the economy—manufacturing, services, retail and so on—was left reeling but nevertheless intact. Employment and exports from manufacturing rose, especially in domestic firms.

The nature of Irish exports left them largely recession-proof. Demand continued for pharmaceuticals, food products and ICT goods, software and services, feeding growth and tax revenues. Moreover, Ireland’s largest export market is the US and the weakness of the euro to the dollar from 2008 substantially assisted cost-competitiveness there—Ireland’s exports to the US were worth €33 billion in 2017 (27 per cent, followed by Britain (12%).

Low interest rates also helped the exit from the troika bail-out, while freeing up resources for primary spending. By the end of 2015, interest costs were €4.6 billion (just 1.7 per cent of GDP). The government was astute in debt management, replacing high-interest debt with lower-interest alternatives, rolling over other debt, negotiating much longer maturities and replacing promissory notes with bonds, saving €2.5 billion. A new international accounting standard, ‘ESA 2010’, helped too, by radical revising Irish GDP upwards, thereby reducing the general government deficit ratio by close to 0.5 per cent of GDP per annum.

‘Internal devaluation’ took place through 344,000 job losses (16 per cent peak to trough), public-service pay cuts of 14 per cent on average and dampened pay rises in the private sector. Ireland’s relative unit labour costs declined by 25 per cent between 2010 and 2016—three times the drop for the eurozone as a whole. Between 2015 and 2019 the public-service pay (and pension) cuts were however reversed. The government installed in 2011 meanwhile ensured that the welfare budget, a major automatic stabiliser, boosted domestic demand effectively in a very lean period—although there were some poorly considered and hurtful cuts. And while half of the private banks’ losses were socialised, about €30 billion will be recovered and the state company established to conduct the associated property transactions will eventually generate a surplus of €4.4 billion.

The austerity programme totalled a hefty €30 billion, of which €18.8 bn was in cuts in public services. The trade unions had proposed a balance of cuts and tax rises and scheduling debt repayment over a longer period, which would have eased the pain.

The EU’s post-Maastricht fiscal rules did not prevent Ireland’s crash, but the collapse in revenue led to severe breaches in these rules by Ireland. Yet they imposed procyclical adjustment and stopped investment, which fell to its lowest level ever in 2013, when it was the lowest in EU.

Mistakes were made in the privatisation of state companies. This generated €9 billion during the bubble—thus inflating it. Such capital could have been put to far better use after the crash. The troika demanded up to €2 billion in further privatisation receipts and despite Labour being in government this was exceeded, reaching almost €3 billion. Well-performing indigenous companies were sold in a downturn at low prices. Yet others remaining in public ownership paid substantial dividends to help the recovery—ESB alone (an electricity company) paid €1.4 billion in dividends in the decade after the crash.

The proposed 12 per cent cut in the minimum wage would have hit the working poor hard. It would have done nothing for job creation nor for the exchequer. Fortunately, it was overturned in 2011 by the new government.

The major mistake was the decision of the prior government, comprising the conservative Fianna Fáil and the market-fundamentalist Progressive Democrats, to bail out all private banks, and especially to repay unguaranteed senior debt, at a cost equivalent to two full years of tax revenue (€64 billion). The ECB however forced the government to do so, Patrick Honahan, a member of its governing council as head of the Central Bank of Ireland, has recently claimed.

This rankles in Ireland, as EU policy on bank resolution was changed later—too late for Irish taxpayers. Nor did the ECB’s ‘quantative easing’ programme begin until 2015.

Honahan has also said the crisis was caused by governments’ ‘crass belief in untrammelled financialisation’.(Honahan, “Currency, Credit and Crisis” 2019 p316 Cambridge) Ireland lost a decade thanks to the policies introduced by the FF/PD government from the end of the intensely successful 1990s, which turned a real boom of growth and jobs into a bubble.

The bubble burst, nearly bringing down the country and necessitating loans from the troika. The associated austerity had a huge impact on public services, on investment, housing, health services and the national debt, which will last for many more years. It could have been avoided.

Yet per capita GDP has recovered to €58,000, compared with an EU average of €28,200. While GDP exaggerates Ireland’s position, the country is still in the top tier of EU states, having been very poor on joining in 1973.

Should it eventuate, however, Ireland will be hit hard by an entirely exogenous economic shock—Brexit.