The season of goodwill to all is quickly approaching. Last year, that goodwill manifested itself in an outpouring of solidarity for the homeless in the form of grassroots activism in Apollo House. With rents and prices on a seeming never-ending upward spiral, the issue of housing affordability and homelessness has rarely been out of the media, or public eye.

A recent ESRI report makes for startling reading. It claims that house prices in Ireland are both quite affordable by international standards and that the current trajectory of prices is driven by fundamental factors (disposable income, interest rates etc.). Though the report mentions the need to increase supply, the degree of undervaluation is found to be somewhere in the region of under 10%. In my view, neither the idea that Irish property is affordable nor that prices have been driven by fundamentals is correct. The first part of this blog will look at the issue of fundamentals.

Figure 1 below displays the trajectory of real house prices among those advanced countries for which long-run data is available. For the vast majority of countries inflation-adjusted house prices exhibited little change from the beginning of the century up to about the 1960s. From the 1960s on, prices began a gentle upward trend, after which they accelerated rapidly in the early 1990s. As can be seen, the period since the 1990s has been one of unprecedented increases in real house prices. In fact, if we were able to go back further the contrast would likely be even starker. One series shows that real house prices changed little from 1642 up to the early 1990s in Amsterdam. That is, despite all sorts of changes in ‘fundamentals’, real house prices have been flat over three and a half centuries! The last three decades or so have also, incidentally, been a period of increasingly severe and frequent housing bubbles in Europe. 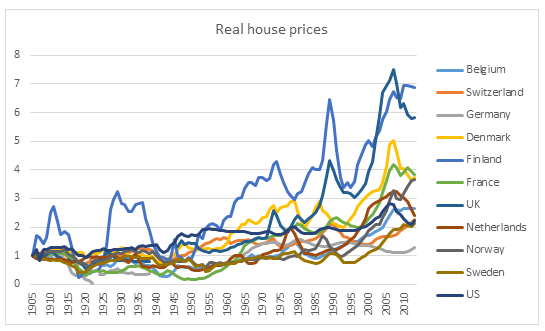 To what do we owe this change since the 1990s? Are we living in a period of an extraordinary flux in terms of demographic, income, and other variables associated with house price changes? No, we are not.

To see why, we digress a little. The early 1990s inaugurated a key change in banking regulation. As economies and financial systems were becoming more internationalised, an international framework of banking rules was deemed necessary so as to harmonise standards and prevent regulatory competition. In 1992, the first Basel Accord was formally implemented. It set limits and standards on the amount of capital banks needed to hold for a given amount assets or loans. To illustrate: when I buy a house I cannot take out a 100% mortgage but may need to come up with 10% of the value myself. My equity or capital is therefore 10% of the value and the remaining 90% I have as liabilities/borrowed. The same applies to banks when they ‘invest’ in assets - that is when they make a loan.

Under Basel I banks were required to have 8% of their (risk-weighted) assets as capital. That is, at least 8% of their total assets needed to be funded using non-borrowed money (shareholders injection or retained earnings/profits) and the remaining 92% could be ‘borrowed’ (e.g. using deposits or issuing debt). Crucially, because mortgage lending was deemed less risky, only 4% of capital needed to be held against residential mortgage compared to lending to businesses (which required 8%). This created a major incentive for banks to expand mortgage lending. It also explains why, despite different national regulatory systems and institutional structures, mortgage lending expanded at the same time in most countries.

Figure 2 below shows these trends and the contrasting outcomes in Ireland and Germany. Credit (%GDP) began a rapid expansion at the same time indicating the existence of common, international processes. Historical data is not available for Ireland which isolates mortgage lending, but the case of Germany clearly shows the increase in overall credit to be driven by the expansion of mortgages. As is evident in the case of Ireland, real house prices, which had been flat for the previous two decades, quickly followed the unprecedented expansion in credit. The processes are, of course, self-reinforcing: an increase in house prices also necessitates an expansion of mortgage lending. Note also how house prices have escalated in recent times despite the absence of credit, as supply shortages have bitten. The lack of an upward expansion in house prices in Germany likely speaks to its regulatory structure in which tenants are comparatively empowered and a variety of other interventions imply rents and prices are slow to move. 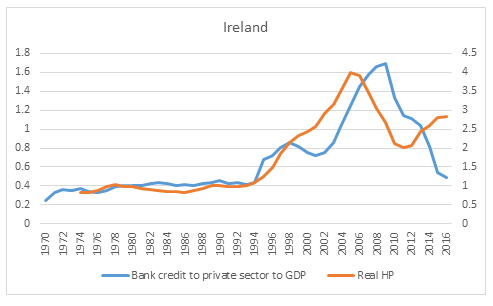 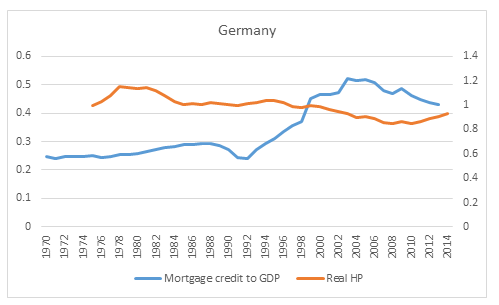 Returning to the fundamentals point, the ESRI finds that house prices in Ireland remain undervalued by estimating the difference between actual and fundamental prices using an econometric model. Data from the 1980s on are used. Whatever the merits of econometric modelling (mostly guesswork in my view, though guesswork is sometimes useful), the report thus abstracts from, or ignores a number of important facts. For one, the current period of house price growth is historically unprecedented. Second, the trigger for the upward expansion since the 1990s was a largely unforeseen consequence of an international regulatory standard designed to prevent destructive competition between primarily Japanese and US (and UK) banks. Third, the current phase has been dysfunctional from a financial stability perspective.

An understanding of these important points casts a different light of whether Irish property prices are driven by fundamental factors. Given the instability that has plagued property markets over the last couple of decades, it is at least as legitimate to say that the pre-1990s markets reflected fundamental values. Current values are thus divorced from reality. To insist interest rates, income, demographics, and other factors are now the major drivers of fundamental property prices is to insist that a period in which markets have been increasingly dysfunctional should be taken as the norm.