Various lobbyists have used the opportunity of Brexit to repeat their frequent calls for Ireland to lower its income tax rates. For example, EY reported in the Irish Independent 'Slash income tax or Brexit will be wasted' 3 April 2017). Minster Noonan has indicated his desire to do so (24 Feb 2017, Irish Times) and Minister Varadkar is presented as a 'low tax' candidate for Taoiseach (25 March 2017, Irish Independent).

There are now two problems with this analysis.

The first problem is the same old problem, the "high marginal rate" of 52% is off-set by tax credits and tax breaks, so that actual tax paid at the higher rate is not 52 cents per euro, but a good deal lower on average.

The chart below shows how Ireland's tax credit system means people on low incomes pay less income tax, USC and social insurance than their counterparts in the UK and USA, never mind France and Germany. But then again, people in Ireland pay cash for more services that are provided collectively (and often free-of-charge) in other jurisdictions, including the UK's NHS. 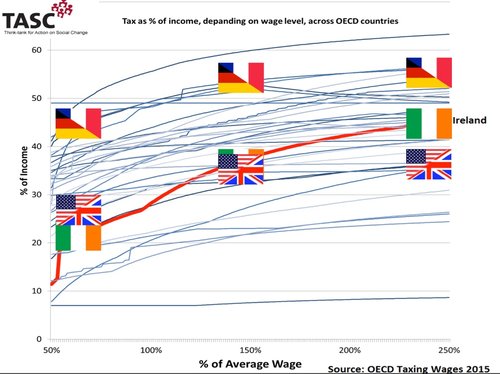 Actual tax paid in Ireland (red line) is slightly above the UK and USA for those earning 1.5 times the average wage, and it is a few percentage points higher for those earning high incomes (2.5 times the average). What the chart does not include are the generous tax breaks for pensions, health insurance, etc. which further reduce the actual amount of tax paid. What is illustrated is how the standard tax system works for a single person, only including basic tax credits.

The second problem with the analysis that Ireland needs to lower tax due to Brexit is that "Brexit means Brexit". In other words, the UK will be outside the EU. Ireland no longer needs to compete with the UK to lower personal taxation, if it ever did. Ireland will be inside the EU, where it will have among the lowest levels of personal income tax paid—as a percentage of income—in Western Europe. On the contrary, what Ireland lacks is the level of infrastructure and public services, including public housing, that other EU member states can provide.

Ireland will remain in an EU that will now be dominated by the social market economy model, not the liberal or laissez faire model of the UK. Over time, the UK's influence on the design of the European Single Market will be displaced by the different philosophies and traditions of those member states who remain. Ireland can potentially offer some of the dynamism of the US model, but it will also have to compete with other member states to provide a higher quality of life.

Richard Florida is a thinker associated with the idea of the "creative class"—the kind of people who work in Silicon Valley or other US high-tech industries. Part of his argument is that these people value decent education for their children, a nice environment to live in, access to green space and cultural activities, good public transit, etc. It is not for nothing that California is both the centre of the USA's high-tech industry and a state with one of the highest rates of personal taxation (albeit still low by European standards).

The fact that nine months after the Brexit vote there is still a radical commentariat advocating for Ireland to mimic the UK's low personal taxes shows how slowly some people are adjusting to how the EU is likely to change once the UK is on the outside.

Given the potential pressure that Ireland's corporation tax regime—not rate—is likely to face due to changes in both the USA and EU, it is high time that there was a serious conversation about what a typical EU market economy is going to look like in ten or twenty years; and whether Ireland is making the necessary adjustments to optimise our position.

A general overview of the Social and Ecological Market Economy by the late Dieter Benecke (former TASC Board member) is one place to start. It is written for the Christian Democratic (centre-right) think-tank, the Konrad Adenauer Foundation, and it is just one example of how the European centre ground on economic policy is far removed from Ireland's laissez faire norms.

Nat O’Connor is a member of the Institute for Research in Social Sciences (IRiSS) and a Lecturer of Public Policy and Public Management in the School of Criminology, Politics and Social Policy at Ulster University.

Nat holds a PhD in Political Science from Trinity College Dublin (2008) and an MA in Political Science and Social Policy form the University of Dundee (1998). Nat’s primary research interest is in how research-informed public policy can achieve social justice and human wellbeing. Nat’s work has focused on economic inequality, housing and homelessness, democratic accountability and public policy analysis. His PhD focused on public access to information as part of democratic policy making.