Is an Irish Trump possible?

Trump’s election should make us reflect about our own national and regional economic and political situations and contexts. Trump’s success has resulted, in significant part, from a deep seated economic insecurity and exclusion amongst growing segments of the US population. So could we see an Irish Trump or new right-wing party elected into the Dail or even lead a new government?

Firstly, while our economy (and our future economic situation) clearly does not have the level of inequality or low level of public services as the US, inequality in Ireland is still a significant issue. And this is likely to increase as economic 'recovery' continues because the nature of the Irish economic model is resulting in a significant proportion of people being excluded from that 'recovery'.

The recovery is thus increasing actual and perceived (or feelings of) inequality. Those at the top are gaining the most from increases in income and wealth. Small wage increases will make little difference for people struggling with debt and crippling costs of living (particularly families with children).

A third of our population suffers material deprivation, a fifth of households cannot cover their monthly bills, 86,000 are still in mortgage arrears, while unemployment disproportionally affects young people and disadvantaged rural and urban areas. A lot of the new jobs are ‘precarious’ – low wage, short term and insecure.

On top of this we have the lack of affordable housing for renters and those looking to buy their home while over 6,000 are homeless (2500 of those children). We have a two-tier apartheid health system and continuing emigration. Things are extremely difficult for many lower income and working class families and an increasing proportion of the ‘middle class’.

The future is not just uncertain, but for many it is terrifying, and many parents cannot see a positive future for their children in Ireland. This underpinned the rejection of the pre-election narrative of ‘keep the recovery going’.

This model now faces a major crisis from Brexit, the Apple tax ruling and Trump’s potential reduction in corporation tax. This increases people’s sense of insecurity.

Not to mention the injustices of the bailout of the Irish and European banks by the Irish taxpayer – at a cost of €64bn leaving Ireland paying 42% of total cost of the banking crisis across all 27 EU Member States. This included taking €20.7 billion from the National Pension Reserve Fund (NPRF) (reducing Irish people’s future quality of life in terms of reduced pensions and investment) . Ordinary people also paid for the socialisation of these private losses through enforced austerity that devastated public and community services and investment.

Furthermore, this increase in debt (also necessary due to the collapse in tax revenues) means that Ireland has gone from paying approximately €2bn a year on interest payments prior to the crash in 2008 to €7bn a year. That equates to 10% of total government revenue and 15% of the total tax take going in debt interest repayments. The physical and psychological scars and wounds of the crash, austerity and the unjust bailouts still run deep in Ireland.

This also explains why the confidence and trust in the Irish political institutions of the Dáil, the government, and political parties has plummeted in recent years. The Eurobarometer (EB) survey of the Irish public carried out in November 2015 shows the collapse in trust after the crash in 2008 (and again after the election in 2011). The graph below shows this and, in particular, it highlights the collapse in trust in political parties. 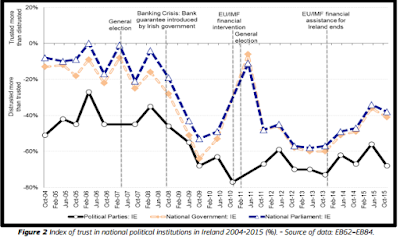 This disconnect between the people and political parties and government is also shown by that fact that just 65% of registered voters actually voted in the general election in February . In Dublin just 62.8% voted (which is down from 68% in 2011). This means that over one million registered voters did not vote at the election – which is twice the number who voted for Fine Gael. While the two dominant conservative parties, Fianna Fail and Fine Gael, got their lowest combined vote, falling for the first time below 50%.

And little has changed since February. The most recent Irish Times opinion poll showed that in terms of their core vote, Fine Gael had 20% and Fianna Fáil, 21%, while Independents had 20 per cent and 19% were undecided. These figures show, firstly, the large section of the population who are alienated from the mainstream parties (non-voters, independents and ‘undecideds’) and thus potentially open to new political alternatives, and secondly, that we are in a period of political volatility with support for parties changing dramatically in short periods of time.

But the election and recent opinion polls also suggest that the anti-establishment mood in Ireland is more supportive of broadly progressive, social democratic, and ‘left’ policies than right-wing Trumpism. Just look at the failure of the right-wing Renua party to get any TDs elected. While the conservative tax-cutting and austerity agenda was rejected in the election as people sought investment in public services, particularly health and housing. This is backed up by the recent polls which showed people wanted the Budget to prioritise investment in healthcare, housing/homelessness and childcare over tax cuts.

So who will be blamed for rising inequality and on-going exclusion from the recovery? Will it be corporate tax avoiders, neoliberal policies, insufficient European solidarity, and growing wealth inequality? Or will it be immigrants, Travellers, or ‘welfare scroungers’.

So far, here in Ireland, we have not seen this blaming of immigrants for the crisis. There are possible historical reasons as a former colonised country, but also perhaps the causes of the crisis are clearer in Ireland such as the bailouts and austerity. While multiple protest movements have pointed the finger squarely at this rather than immigrants.

But in a changing economic and political landscape this could shift and the anti-establishment political space could be taken by conservative right wing populists. This is even more likely if the progressive political and civil society movements and parties fail to occupy that space, and if they fail to speak to, and represent, the concerns of the struggling working and middle classes.

Progressive politics also needs to embrace the age of social media and citizen empowerment, changing the nature of political parties and making them more citizen-led.

We are in an unprecedented time of political and economic upheaval. Anything is possible.

The potential nightmare scenario of an Irish Trump is possible given the economic crisis and distrust in political parties and government in Ireland. However, this means that there is also an opportunity for a progressive politics in Ireland to direct people’s anger and frustration towards the root cause of their economic problems – neoliberalism – and offer an alternative vision based on equality and human rights for all citizens, delivered by a strong supportive state with high levels of public services and investment, regulated markets and a strategy for real quality employment.