Listening to and Learning from Young Voices

The importance of incorporating young voices into future plans and developments.

Why Listen to Young Voices?

Using the concept of the child as an indicator species for cities, espoused by Bogotá’s former mayor Enrique Peñalosa, the vision for the ‘Young Voices’ challenge was established. In order to design inclusive and accessible cities, towns and villages the voices of the often unheard and most vulnerable need to be listened to. Therefore, children are an ideal starting point as they will benefit the most from design and development plans as it will impact on their future.

As part of the TASC People’s Transition pilot project in Ardara, over 50 submissions were made to ‘Young Voices’, a competition for young people living in Ardara, to tell the TASC People’s Transition team how they could make their community even more welcoming for people and nature. Prizes were awarded at a showcase event on the 7th May to the most creative and inclusive entries. The submissions explored how their needs and those of their family, friends and nature can best be met.

The team at TASC have been overwhelmed by the level of response and ideas generated by the ‘Young Voices’ challenge. It has clearly demonstrated that children want their voices heard, that they are interested in the future of their local areas and that they are capable of producing worthy ideas. 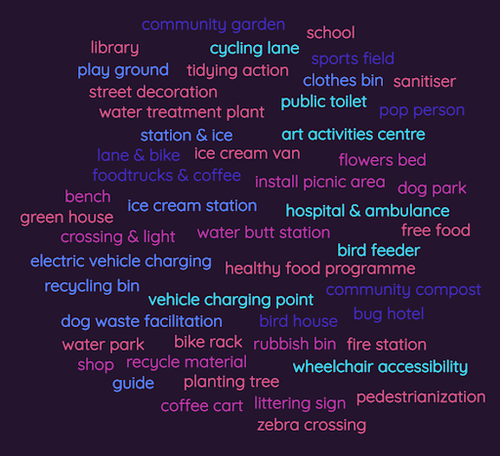 Ideas included in the children’s submissions.

The contributions submitted by the children have provided the team at TASC and undoubtedly the local community with an array of new knowledge and ideas for how to progress the project and future of their town further. Some common themes generated by the project included more green spaces, biodiversity, accessibility for wheelchair users and places for pets. Whilst the competition contained prizes in two categories, it was clear that these categories of being more welcoming for nature and for people are interrelated and do not have to be examined in isolation.

Suggestions for how to make Ardara more welcoming for nature included more recycling bins, bike trails, safer roads, a local water butt station, a bug hotel and places to charge electric cars. The entries highlighted the importance of green spaces and included images of flowers, community gardens and pollinators. Evidently, young people have engaged with and understand the needs of nature, wildlife and can provide substantive solutions to environmental concerns.

Ideas for how to make their community more welcoming for people, children suggested wheelchair ramps, a food drive, supports for the homeless and playgrounds which are accessible to everyone. Additionally, making their locality a safer place such as installing more traffic lights and safer crossings was a feature in many of the children's entries.  The awareness and inclusion of people facing disadvantage in their drawings is noteworthy and the children have provided creative solutions to tackle these societal problems.

Crucially, ideas generated by the children will contribute to wider community engagement and consultations, including an online survey, which will take place throughout the months of May and June for all adults living in Ardara. TASC will endeavour to make every contribution from the ‘Young Voices’ challenge incorporated into the ongoing community dialogues so that these often unheard voices are listened to and learned from.

About the TASC People’s Transition Project

The village of Ardara and its surrounding area in West Donegal is one of the two communities who have signed up to pilot TASC’s pioneering new People’s Transition project. The pilot project is being supported by AIB. The People's Transition views climate action as an enabler of local development, giving people and communities ownership of the transition to a zero carbon society and enhances public support for a Just Transition by tackling inequality and raising standards of living through the delivery of climate solutions. The project hopes to give more power to people in their own communities to become more inclusive and resilient. It hopes to help communities as they continue to try to meet all the challenges they face now, while making imaginative and equitable plans for the future.

To find out more about the project, you can find the People’s Transition report here or reach out to scahn@tasc.ie for more information.

Ciara is currently undertaking a work placement with TASC as part of her Bachelor of Science (Applied Social Sciences) degree programme at NUIG. Ciara works primarily with the TASC Climate Justice Centre where she helps with the People's Transition projects.