Childcare: time for a new model

The pandemic has turned life upside down for everyone; people locked up in their apartments and houses, job losses, income losses, furloughs, lost loved ones, and more. All of us still have limited mobility, though some sectors are gradually opening up, such as schools. Among the lessons the crisis has taught us is how dependent we are, as a society, on childcare and on childcare workers. In this piece I look at how market mechanisms result in poor pay in the sector and how public investment is required if things are to improve.

Ireland's record is far from exemplary. Cross-country comparisons are not perfect, and not updated regularly, but they point to Ireland being one of the lowest spenders in the EU. The figure below puts Ireland's spending into perspective. It is based on OECD public spending on early years and  pre-primary education as a percentage of national income (* represents GNI*, the favoured measure of national income in Ireland, otherwise GDP). As such, it excludes after-school childcare spending and the figures relate to 2016. As can be seen, Ireland ranks at the bottom in the terms of public funds allocated to the early years sector. 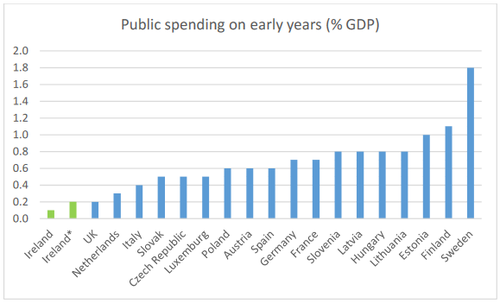 Source: Inequality and the Care Economy

Ireland has a number of schemes relating to early years and childcare. The most important is the  Early Childhood Care and Education Scheme (ECCE). ECCE is a universal, publicly funded scheme whereby the state pays childcare providers to provide care. It is available to all children in the two years  prior to starting primary school or three hours a day, five days a week, 38 weeks of the year. The other major scheme the National Childcare Scheme (NCS), which provides financial support alongside the ECCE. 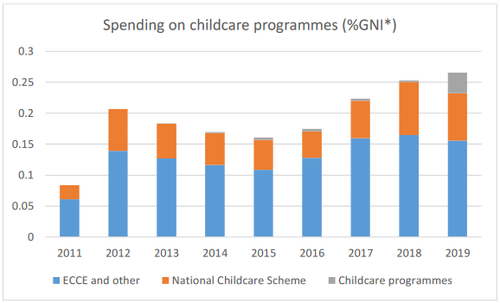 Source: Inequality and the Care Economy

Has funding increased in recent years? Yes, as shown in the figure below based on national as opposed to OECD figures. In 2019, the government spent almost 0.16% of GNI* on ECCE and almost 0.08% of national income on the NCS. Pre-Covid, spending had been on an upward trajectory after  falling during the financial crisis. But even on these figures, we are still significantly behind our European counterparts. We are well behind the UNICEF target 1%.

There are many consequences of such underinvestment including reliance on informal care and reduced participation of women in the labour market. The other is that wages in the sector will necessarily be depressed. Latest figures show that early year workers earn just €12.55 per hour on average. As well as making it difficult to live, it contributes to the sector's low status and high staff turnover.

A variety of market mechanisms lead care work to be poorly paid, absent significant public funding. To understand why, it useful to look at how a typical for-profit firm might increase wages, as most providers are for-profit. One avenue to increase pay is to maintain current profit margins, but increase prices. For some classes of care workers such as medical professionals this would be possible, as people have little choice but to put up with higher costs. However, childcare is different to medical care in that it can households can perform care themselves in the household when it becomes too expensive. Moreover, Ireland already has among the, if not the most expensive childcare in the EU. Significant prices increases would make it uneconomical for households to do paid work. This would inevitably result in fewer women in the labour market, and reduced demand for formal care, and hence job losses.

Another route to higher wages is through increased productivity. This can generally be done through getting workers to work more intensively (increasing 'output per hour'). Aside from the ethical considerations, this is not feasible in a care context. What is different about care is that the quality of the service is necessarily dependent on the time spent doing it (similar to a therapist, for instance). To increase productivity in that way, through either shortening crèche opening times or increasing the number of children under supervision of an individual worker, would be to degrade the service. The other route to higher productivity is through innovation, which basically means technological change and automation. Again this does not apply to non-medical care in general, and to childcare in particular - it is necessarily based on face-to-face interaction. Higher wages through productivity does not apply in an early years care context.

The other, final route to higher wages is for wages to come at the expense of profit margins. Again this is not feasible in an Irish context. A typical owner/manager of a private facility reportedly earned less than €27,000 according to a 2016 study by Early Childhood Ireland. Lower margins would make many settings unviable.

To the extent that care is commodified, wages will be low. Low wages in Ireland are a result of low investment and reliance on the market for provision. This need not be the case of course. In Denmark, early years workers earn comparably to primary school teachers. The upshot is that if we want Danish pay conditions, and hence Danish levels of respect for care workers, we need Danish levels of investment. The recent decision to raise pay and conditions through the establishment of Joint Labour Committees is a very welcome step. These are committees in which unions, business, and the state set bind rates of pay in a sector. It reflects years of hard work by organisations on the ground. But if wages are to increase significantly, public investment will need to do so as well.