The economic fallout from the pandemic has affected workers in Ireland across sectors, positions, income, and skills. However, the closure of businesses in accommodation, food, and tourism has affected in particular low paid workers and especially young people, women, and members of ethnic minority communities and migrants. According to the ESRI, East European nationals experienced a larger drop in employment in the first half of 2020 than Irish nationals. Because this population was less likely pre-pandemic to be able to work from home in their particular jobs, they also experienced greater job loss than West Europeans and non-EU nationals, who were even more likely to be able to work from home than Irish counterparts. Amongst the East Europeans facing job loss and temporary lay-offs, women have been particularly hard hit.[i] (McGinnity et al 2020)

In a March 4, 2021 speech for the ESRI, Minister for Finance Pascal Donohoe acknowledged the inequality of job and income loss amongst young people and workers in public facing industries. He noted that hours worked in the food and accommodation sector had fallen at an annual rate of 53% in the last quarter of 2020 compared to a 3% rise during the same quarter in the information and communications sector.[ii] He also mentioned that the unemployment rate, including PUP recipients, amongst young people aged 15 to 24 had risen 46% in the last quarter of 2020, versus 19.8% amongst the larger population. Finally, he compared the likely growth in employment amongst workers with a third level degree last year versus the fall in employment rates among those without this qualification.

After recognising the groups who had suffered the most from the economic fallout of the pandemic, he turned to the challenge of managing rising national debt as a small nation in the Eurozone. Yet, if a return to austerity to decrease public debt is politically too perilous, then the government will have to, sooner rather than later, consider how to create jobs and generate tax revenue. In doing so, they should focus on how to avoid repeating segregation in the labour market between low wage sectors like hospitality and the higher wage sectors like hi tech. Organisations like Social Justice Ireland[iii], unions, and TASC have repeatedly critiqued reliance on large low wage sectors. Considering the impact of Covid-19 on revenue, does the government have an opportunity to rethink job creation and, correspondingly, working conditions in those jobs?

CSO data on comparative weekly earnings showed that pre-pandemic sectors like information and communications, financial and insurance activities, and public administration and defence earned well above €1000/week whereas the average in sectors like retail, accommodation, arts, and other service activities averaged below €600/week.[iv] According to Eurostat data[v] (December 2020), low wage workers in Ireland experienced one of the most significant losses in income in all of the EU. 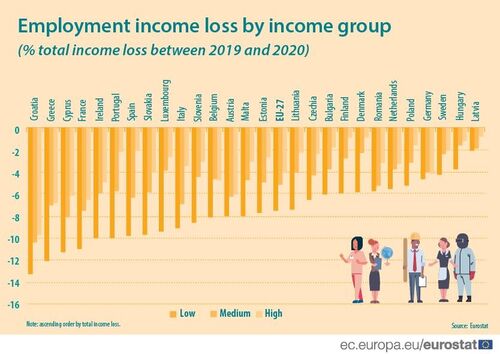 Sectors like tourism, where there is a significant concentration of low paid workers, may take several years to recover.[vi]  Moreover, TWSS has prevented business closures but not necessarily assured business sustainability. Even pre-pandemic, SMEs in Ireland faced challenges regarding productivity, value added, export levels, and digitalisation.

Compared to other EU countries, SMEs in Ireland consist of a larger number of very small firms, suffer from regional disparities in investment and infrastructure, and engage through exporting or supply chains with a smaller number of companies than counterparts elsewhere in the EU. One consequence has been partial or full closures during the pandemic and redundancies. A recent survey of 500 SMEs commissioned by Vodafone and led by economist Stephen Kinsella (2021)[vii] found that 75% of businesses had not been able to facilitate remote working and 25% were not confident in their staff’s digital skills. However, it should be said that over half were planning to invest in those skills and, more generally, businesses had adapted to online sales and communications.

Considering all of these trends, the government could pursue four areas of investment to create jobs and facilitate not just economic but also social and psychological recovery, both of which will affect how the economy rebounds. These areas include interlinked community-based health and social services, R & D alongside training and higher education to push domestic innovation and skill development, support for SME diversification of supply chains and customer bases, and ecotourism, which has implications for broadband, transportation, and more general rural and coastal development.

All of the investment would prioritise ‘social value’, and specific practices of co-creation with local and national stakeholders. In a report for the UK government last year, MP Danny Kruger argued for awarding government contracts based on social value, to “encourage a more collaborative and trusting model of service design and commissioning.: (2020, p. 22) He states that, “Currently the majority of charities with a government or local government contract feel they have no influence over the services they deliver. The social value declaration would encourage commissioners to make use of existing, but generally disregarded, flexibilities in the existing rules …to work with potential providers on the design of a contract, seeking to leverage their resources - including their expertise and ideas - to support the public budget.” Others, like Philipe Pochet (2021) have made similar arguments,[viii] framing social value within a larger socio-ecological contract between states and citizens.

Relatedly, the government should encourage collective bargaining in sectors with a predominance of low paid workers. Irish trade unions are relatively weak compared to other European counterparts. However, strengthening their capacity and prevalence will have knock-on social and public health consequences, as well as financial, as evidenced in Siptu’s efforts to gain statutory sick pay for meat processing plant workers in order to slow the spread of the virus.[ix]

Whatever the eventual conceptual reference, or to social contract, social value, etc…, the growing consensus is that the aims, implementation, and evaluation of policy programmes will have to go beyond economic measurements. Instead, they will have to account for impact on both indicators like productivity and value for money and individual wellbeing and collective solidarity, versus inequality and social segregation. Looking to the sectors and businesses that build solidarity and improve wellbeing will not just contribute to economic growth and resilience, but also to Irish society.

Dr. Shana Cohen is the Director of TASC.

She studied at Princeton University and at the University of California, Berkeley, where she received a PhD in Sociology. Her PhD analyzed the political and social consequences of market reform policies in Morocco for young, educated men and women. Since then, she has continued to conduct research on how economic policies have influenced political and social identity, particularly in relation to collective action and social activism.

She has taught at George Washington University, the University of Sheffield, and most recently, University of Cambridge, where she is still an Affiliated Lecturer and Associate Researcher.  Her areas of teaching have included global social policy, globalization, and human services.

Before coming to TASC, she was Deputy Director of the Woolf Institute in Cambridge. In her role at the Institute, she became engaged with interfaith and intercultural relations in Europe, India, and the Middle East.

Beyond academic research, Shana has extensive experience working with NGOs and community-based organizations in a number of countries, including Morocco, the US, the UK, and India. This work has involved project design, management, and evaluation as well as advocacy. She has consulted for the World Bank, the Grameen Bank Foundation, and other private foundations and trusts.