The decline in inequality:

a question of emphasis

The latest CSO SILC release makes for some interesting findings. It shows that income inequality has continued to fall. This makes Ireland unusual among developed world, where inequality has generally risen. Seamus Coffey has highlighted the progress Ireland has made and points to, among other things, low work intensity as raising inequality, and the role our tax and welfare system plays in reducing it. Here I question how good our performance has been, the narrative around low-work households, and the progressivity of our tax system.

First, can the numbers be trusted? The critique of the official inequality figures is that they are based on voluntary surveys, which suffer from non-response and under-reporting of income by the rich. Data collected by the Revenue, on the other hand, do not suffer from this problem, and show income concentration to be growing. This data is not perfect either as it includes only taxpayers, among other problems. This has made pronouncements about the direction of inequality uncertain. However, forthcoming work by ESRI researchers reconcile the two types of data and it gives greater confidence that the survey data is correct - that income inequality has fallen in Ireland.

Another problem has emerged in the last couple of decades which calls into question how well conventional approaches to inequality are capturing differences in living standards: the explosion of house prices. When house prices increase, homeowners, who tend to have higher incomes, are insulated whereas most of society must fork over an increasing share of income on the most basic of necessities, shelter. So even if the ratio of, say, the income of the top decile to the bottom two fifths has remained constant, when house prices have risen so much inequality in living standards is likely to be growing. There aren’t any figures on inequality after housing costs are subtracted in Ireland, but it has very likely risen (see the UK and Germany).

Those caveats and qualifications aside, how should we interpret the fall in income inequality? One point to note is that Ireland has historically had high levels of inequality, and its more middle ranking nowadays is as much a reflection of inequality growing elsewhere than good performance here. If we use the earliest years of data from the OECD, around two thirds of EU countries had lower inequality in the 1980s and 1990s than Ireland does today.

Nevertheless, it has fallen and that certainly is a good thing. The major reason is the expansion in employment as the Celtic Tiger began to growl. The largest decline in inequality happened in the late 1990s and has been relatively stable since. But reliance on employment expansion to reduce inequality further is a double-edged sword. For instance, reforms to one parent family payment during the crisis years reduced eligibility, and pushed single parents into employment. Low pay employment, the likely destination, is more poorly paid in Ireland (relatively) than most other European countries, tends to be less unionised here, and is often unstable. Nevertheless, reforms to the scheme were associated with a fall in poverty risk, which would translate to reducing inequality.

Ireland does have many households who do not do paid work and many households that are only marginally attached to the labour market. The existence of high levels of so-called 'low work intensity' households elevates market inequality and raises the possibility for reducing it by once again expanding employment. However, if you look at total working time - paid work, caring work, domestic work, and commuting - men and women alike in the bottom quarter of the distribution do only slightly below average hours per week. While the bottom quarter is not synonymous with low-work intensity households, there is much overlap between them. The term ‘low work intensity’ is tendentious and neglects non-market work. 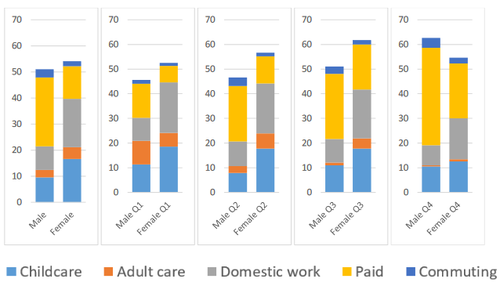 Inequality and the care economy

If we insist that only paid work is real work, it is worth looking at why we don’t have more people in employment. Our welfare state facilitates care and other forms of unpaid work through spending more than other countries on cash transfers. However, the generosity of the transfer system is not the main impediment to the labour market. The cost of childcare is, at least according to the OECD's tax benefit model. Among two children households, for both lone parents and partners of a working person childcare fees dwarf lost benefits in terms of the financial disincentive to paid employment.

Finally, our taxation system. It is often said that ours is the most progressive in the EU. This is partly a product of necessity given our high inequality in market incomes. For instance, among EU countries Ireland has the third most unequal distribution of income from the labour market, after controlling for hours worked. Importantly, our tax system is not as progressive as it first appears. For instance, when payment of VAT and other indirect taxes are factored in, the tax burden is actually U-shaped. The poor pay almost the same proportion of their income as the rich. We may still have among the more progressive tax systems, but things are not as rosy as they appear. 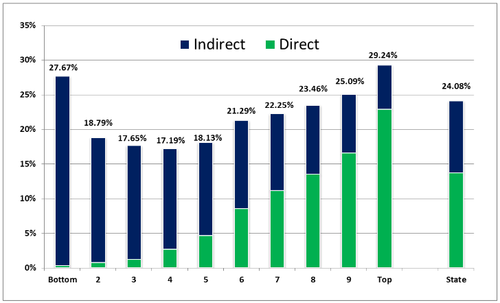 Total direct and indirect tax contributions of households in Ireland

In sum, income inequality, according to the best evidence, has fallen; Ireland, by conventional measures, has the most progressive tax system in the EU; and Ireland has a very high share of low-work intensity households. It is also the case that in historical terms our inequality is high, and differences in living standards have likely increased. Lower income households basically work as much as the rest of society, and the poorest pay almost the same share of their income in tax as the rich. Facts are facts and needn’t be quarrelled with. But there are many ways to present them.