The issue of pay and employment props up occasionally in public discourse but rarely receives the attention it merits. With international women’s day just passed, rising discontent surrounding pay, and TASC’s recent submission to the low pay commission, now seems a good time to revisit the matter. In particular, a recent OECD report makes for some interesting reading, and examines, among other things, a number of issues surrounding the Irish labour market.

In particular, the OECD makes suggestions for raising Ireland’s low employment rate. It notes, correctly, that Ireland’s employment rate is low, especially among less educated women. For the OECD, aspects of the welfare system disincentivise labour participation. It mentions, without explicitly advocating reducing, Ireland’s high unemployment assistance for long-term unemployed, and also housing benefits. It also identifies anomalies whereby recipients lose large support in transitioning from welfare to work. It thus advocates a more gradual reduction in welfare payments such as the Family Income Support. Moreover, it argues for shifting the focus of activation programmes from direct employment towards training, as well a more clear enforcement of welfare reductions when recipients do not take up work.

The phasing of welfare supports upon transitioning into work is sensible. Reorienting activation away from (especially bogus) direct employment may also be helpful, though Ireland’s recent record on activation is decidedly mixed (there are a number of other non-labour market proposals which are welcome, but won’t dwell on such as a land tax, greater funding for R&D, among others).

But regarding Ireland’s ‘high’ replacement rates for long-term unemployed, housing support, and calls for greater enforcement of welfare reductions, a number of points are worthy of mention. It may or may not be the case that making the downtrodden more downtrodden through pushing them into (mostly miserable) jobs, raises employment. It is also the case, though, that providing decently-paid jobs is at least just as effective. While not advocating a return to boom-and-bust economics, as shown in Figure 1 below, Ireland had a high employment rate in 2007. Unlike in 2016, pre-crisis its employment rate was among the highest in Europe. People are more than willing to work, especially if they are paid decently. 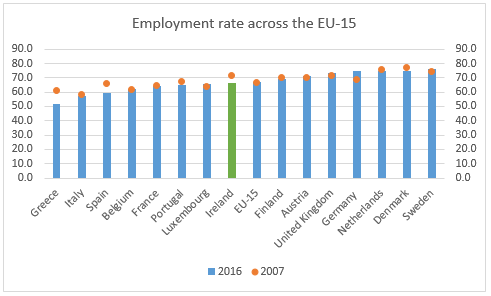 Figure 1: Employment rates in the EU.

However, the OECD notes that ‘Average wages are now comparable with the top tier of OECD countries’. It warns that a more rapid tightening of the labour market could raise labour costs such that competiveness is threatened (p14).

In terms of competitiveness, a better measure than earnings is labour costs. Labour costs include wages and salaries, but also employers’ social contributions (i.e. employer PRSI in the case of Ireland). Eurostat provides cross-country figures on this. Figure 2 below thus shows Ireland’s hourly labour costs for 2016 relative to other EU-15 countries (SOE denotes small open economies: Austria, Nordic countries, Low Countries, and Ireland). Relative to other countries, at €30.4 per hour, the levels of compensation in Ireland are low. It is marginally below the EU-15 average, which is brought down by the significantly poorer Mediterranean countries. In purchasing power terms, Ireland moves further down the compensation scale as relatively higher prices here mean that workers in Italy can purchase more with their earnings. 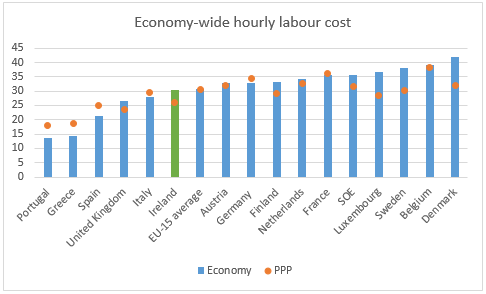 It should also be borne in mind that many of the countries with lower labour costs are not really export competitors. Southern Europe tends to be lower tech. Ireland’s exports are dominated by chemicals and IT services, and also financial services. In those sectors, labour costs also tend to be below average, though not in IT and communication. To speak of competitiveness being threatened by general increases in wages is curious.

Of course, Ireland’s low employment cannot be reduced to better pay and conditions. Female participation in the labour market has long been low in Ireland, and has barely moved over the period since the crisis (65.8% for 20-64 year olds in 2007 and 65.4% in 2016). The report does advocate increasing childcare spending, but by only 0.1% of GDP. This is inadequate.

Figure 3 below shows the relationship between public spending on early childhood education and care (ECEC) and the female employment rate for 25-54 year olds. Unfortunately, the data relates to 2013, the latest year for which I could find cross-country comparisons on ECEC spending (though it avoids the large distortion to GDP from 2014 on). Unsurprisingly, there is a strong positive relationship. Sweden, for instance, has both the highest female employment rate and spends the most on ECEC. Ireland is well below what most countries spend, and also has the third lowest female participation rate. 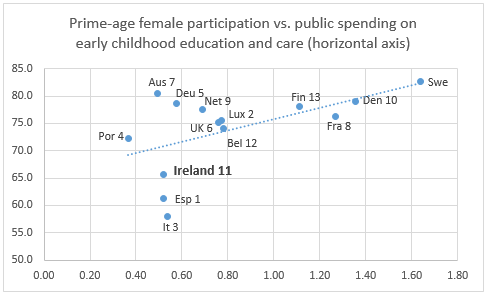 Note: Numbers represent the ranking of in-work poverty incidence. Spain has the most, Finland the least.

Some countries, namely Austria, Germany, and Portugal, manage to achieve higher participation rates with relatively low state outlays. It should be noted, though, that in-work poverty is around double the rate in those countries compared to Ireland. In work poverty is low in Ireland despite high levels of low pay because of the various supports provided to poorer workers such as the mentioned housing allowances, family income supports, and so on.

Thus, Ireland appears to have policy choices about raising its employment rate. Pushing poor people, and poor women, into poverty-paying jobs might do the trick. Or it could provide decent-paying jobs, including decent and affordable childcare. The latter option would require some additional taxation, but would also raise revenues and aggregate living standards through higher employment. As well as reducing poverty, it would also be good for gender equality.