Much of the response to rapid growth of the private rental sector has focused on the issue of high rent levels. This is hardly surprising given that we have seen average rent increases of 60% nationally since 2012 (Nugent, 2018). However, the concept of ‘precarity’ is useful in drawing our attention to the more nuanced issues around the experience of housing insecurity. Housing insecurity has wide-reaching effects: it means difficulty maintaining employment, accessing education and training, integrating into sustainable communities as well as challenges for mental health and social life. Housing is not simply a form of shelter but a more complex resource which is linked to ontological security, social relationships and social reproduction (Hulse and Milligan, 2014).

The most straightforward way to begin thinking about the relationship between private renting and housing precarity is to look at security of tenure under Irish legislation. The tenancy period under what is known as the ‘Part IV Tenancy’ provisions of the Residential Tenancies Act is of a six year duration. However, landlords can terminate tenancies within the tenancy period on a number of grounds:

There is no data on the number of evictions arising from the above. However, in 2017 terminations were the biggest issue facing tenants, according to Threshold (Threshold, 2017). Similarly, the Residential Tenancies Board reports that the most prevalent form of dispute registered by tenants in 2017 was ‘invalid notice of termination’[1]. In addition, data from homeless service providers suggests that security of tenure in the private rented sector (PRS) is the principal driver of homelessness (Hoey and Sheridan, 2017: 4).

We can also see, drawing on the Household Budget Survey for 2015, that more than 50% of tenants have been resident in their current dwelling for less than 3 years. This compares with around 5% of mortgaged owner occupiers and around 11% of local authority tenants. Many tenants do not have the experience of establishing a home and remaining in it beyond a couple of years. 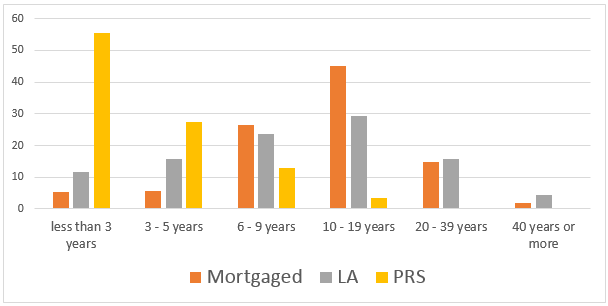 Duration of residency by tenure.

Here we must remind ourselves that housing is central to ontological security, identity construction and social relations (Hulse and Milligan, 2014). Sociologically, home is a ‘safe haven in which individuals can be themselves and from which they can derive an enhanced sense of emotional security’ (Walshaw quoted in Easthope, 2004: 581). Through my research and participation in the Dublin Tenants Association, I have spoken to dozens of tenants about the deep sense of insecurity and frustration they feel. For example, one tenant told me that he hasn’t unpacked the boxes containing all his belongings despite living in his current residence for more than ten months, simply because at the back of his mind he anticipates moving shortly. And for some tenants it is simply not being able to paint the house, to plant something in the garden or to have a pet. These may seem trivial, but they speak to an underlying sense of a lack of autonomy and control.

Feminist political economists have also emphasised that the home is not just about subjective wellbeing, but is also a place of work. The home is the key site of social reproduction, the caring labour through which we reproduce ourselves. Consider the ways in which practices of child care are embedded within a specific domestic environment and locale. Moving house frequently means undertaking additional reproductive work, such as establishing new routines, creating a new bedroom for a child where they feel safe and so on. Social reproduction is not an individual task, moreover, but rather embedded in social network, e.g. extended family, neighbours and friends. Such networks are typically geographical and place-based and as such the absence of security of tenure, and likely frequent evictions, means potentially losing access to them. This is especially important when we consider that, as indicated below, almost 50% of one parent families and a quarter of two parent households are private renters. 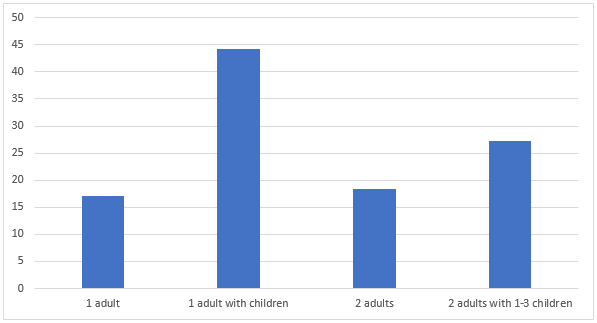 In sum, for the approximately 800,000 people renting privately in Ireland there is very little security. Housing and ‘home’ are not just a question of shelter. Rather, they relate to a crucial resource which underpins our economic, social and psychological well-being and the practices through which we sustain ourselves materially (social reproduction) and psychologically. Unlike both home owners and social housing residents, tenants’ capacity to create a place of safety and security, a sense of their identity and place-based practices and networks of social reproduction and care, is severely undermined by a policy context which systematically produces housing precarity.

Nugent, C. (2018). Wage sufficiency in the context of the Irish Housing Emergency - Rents and access to homeownership. Dublin: NERI.

Michael Byrne is a lecturer in political economy at the School of Social Policy, Social Work and Social Justice at UCD. His work is focused on urban political economy, in particular the relationship between the financial system and the built environment as well as the politics of housing and urban activism.