Earnings statistics have been produced in Ireland since the early 1900s, published in the Irish Trade Journal and Statistical Bulletin. Broad industrial average earnings were first published in 1938.

These statistics focused on industrial employees in the industry sector, where the majority of non-agricultural employment was based. Since then additional data has been published, including more occupational and sectoral categories. 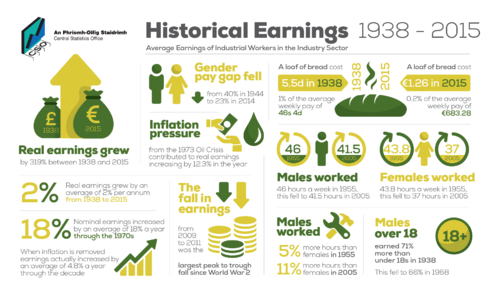 Commenting on the report, statistician Brian Cahill said: “This publication joins available data to compile a series of earnings statistics over the period 1938 to 2015. This merged series provides insight into how earnings have evolved from before World War 2 to the present day.

“Statistics are presented in real (2015 prices) and nominal terms to illustrate the purchasing power of earnings over the period and to allow users relate historical earnings to those of the present day.

“The purpose of this Historical Earnings publication is to compile available average earnings data and present them in as coherent a series as possible. Caution is advised when interpreting this data as surveys over the 77 year period were carried out utilising different methodologies, definitions, sectoral classifications and occupational classifications.”

Paul Sweeney is former Chief Economist of the Irish Congress of Trade Unions.  He is …