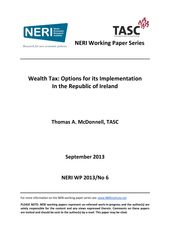 TASC economist, Tom McDonnell, has written a detailed analysis about the options available for the introduction of a wealth tax in Ireland. This has been published as a joint TASC-NERI Working Paper. The proposed model of wealth tax would only affect those with over €1 million in assets (the top one or two per cent of the population) and would have ceiling provisions to protect people with low incomes. Based on cautious estimates such a tax could raise hundreds of millions annually and would have less damaging impact on society and the economy than many other budget adjustments being considered.