The Role of Access to Information in Ireland's Democracy 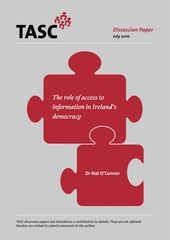 This paper, authored by Dr Nat O’Connor, restate the case for strong laws to enforce the public’s right to know what government and public bodies are doing.

Secret government, hidden information and blanket confidentiality are all inextricably linked to costly decisions which could be avoided if more people knew about them sooner. We need to open up policy-making to public scrutiny – by starting at the top and insisting that real explanations for policy decisions are given to the public by ministers as a matter of course.

TASC’s work on open government follows on from our work on public bodies and accountability, published as Outsourcing Government in 2006, and the report of the Democratic Audit Ireland project, Power to the People, published in 2007. Strengthening Ireland’s democracy is vital to securing sustainable economic development, and public access to complete information is a basic right to ensure that explanations and evidence are given for the public policy decisions which affect us al.

In The Role of Access to Information in Ireland’s Democracy, Dr O’Connor argues that Ireland lags behind comparable democracies in terms of open government and policy-making. The Oireachtas is one of the weakest parliaments in Europe, due to its lack of power to compel ministers to answer questions or deliver documents to committees in a timely manner. Dr O’Connor also contends that a culture of secrecy – exemplified by the fact that no government has abolished the Official Secrets Act 1963 – prevents the public to gain meaningful explanations of government policy decisions. The Freedom of Information Act 1997, designed to open up decision-making to public view, was eviscerated in 2003. The paper argues that a major shift in thinking is required if Ireland is to catch up with other advanced democracies and move to an era of open policy-making.