The Problem with Tax Breaks 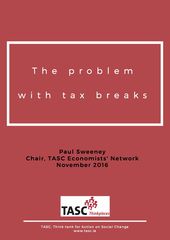 It is increasingly recognised that the growth in inequality is one of the greatest socio-economic challenges facing developed democracies.   The rise in inequality is often held responsible for the growth of the Far Right in Europe, the support for Brexit and for Donald Trump, and even for the fractious political situation in Ireland today.

In Ireland the level of market incomes inequality is one of the most extreme in Europe (Hearne and McMahon 2016).  However taxation and state expenditure reduce this inequality.  On the one hand taxation funds public services which can be used by everyone and taxation also pays for the various benefits and subsidies to those with low incomes.   On the other hand, taxation can reduce inequality if it is levied progressively.  It is a widely accepted principle of social justice that taxation should be progressive – those on higher incomes should pay more, not just absolutely but also relatively.

While Irish direct tax rates are indeed somewhat progressive given the two income tax rates of 20 per cent and 40 per cent and the income bands of the Universal Social Charge (USC), this progressivity is significantly reduced by the existence of a large number of so-called tax expenditures  or in popular terminology, ‘tax breaks’, ‘tax reliefs’ or ‘tax shelters’.

This report identifies 126 separate tax expenditures, but this is in fact an incomplete list.  The total cost of all such existing tax breaks is not known, although Revenue estimated that they cost €22.95 billion in 2014.  However, in addition to the 126 tax reliefs identified here, there are a further 26 ‘undead’ tax reliefs – so called because while the exemption has been ended for new claimants, exemptions already granted still have some time to run.  These zombie reliefs cost over a hundred million euros every year (€157m in 2014).

This paper argues that although tax expenditures are usually justified in terms of social or economic objectives (e.g. recovering their costs in additional revenues), some of them seem to have been actually introduced as a result of lobbying by special interest groups, while others are engineered by the tax avoidance industry. While some tax expenditures bring little or no actual benefits in terms of their declared aim, they reduce the income available to the state.  To the extent that they shield the wealthy from tax, they undermine the effectiveness of the government’s efforts to reduce inequality.