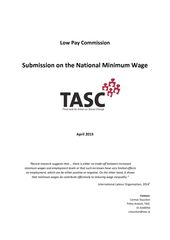 April 2015 - TASC Submission to Commission on Low Pay Summary Economic Inequality is now recognised internationally as one of the greatest challenges facing modern economies and societies. While there are many causes of inequality, it is acknowledged that low pay is at its root. In Ireland, wage and salary earners have higher out of pocket expenses due to:

A Commission dedicated to annual recommenations on the appropriate levels of minimum wage is very welcome. Income inequality is rising in Ireland, and when it comes to how the market distributes income we are the most unequal country in the OECD. This is caused by:

While taxes and social welfare play a major role in reducing market inequality, this high dependance on tax and social welfare to make up for low market incomes diverts resources from key public services and is unsustainable in the longer term. Therefore reducing inequality of earnings and stemming a rising incidence of low pay are key challenges to be addressed to avoid the negative societal impact of economic inequality and to enable greater resources to be invested in key public social services.

The minimum wage is an important tool in addressing market inequality. In order to be effective it must be close to a Living Wage and the Low Pay threshold. TASC’s research, based on the best available data both nationally and internationally, finds that as it currently stands the Irish Minimum wage is well below both of these targets. If Ireland had a minimum wage that was equal to a Living Wage there would be close to an additional €1 billion spending in the local economy by people currently on low incomes.

TASC recommends that the Minimum Wage be tracked against median earnings and the cost of living. We urge the Commission to consider the findings of the Irish Living Wage Technical Group, and to find ways to bring the Minimum Wage