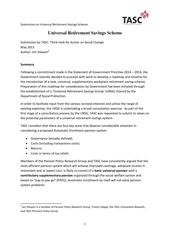 Following a commitment made in the Statement of Government Priorities 2014 – 2016, the Government recently decided to proceed with work to develop a roadmap and timeline for the introduction of a new, universal, supplementary workplace retirement saving scheme. Preparation of this roadmap for consideration by Government has been initiated through the establishment of a ‘Universal Retirement Savings Group’ (URSG) chaired by the Department of Social Protection.

In order to facilitate input from the various sectoral interests and utilise the range of existing expertise, the URSG is undertaking a broad consultation exercise. As part of the first stage of a consultation process by the URSG, TASC was requested to submit its views on the potential parameters of a universal retirement savings system. TASC considers that there are four key areas that deserve considerable attention in considering a proposed Automatic Enrolment pension system:

Members of the Pension Policy Research Group and TASC have consistently argued that the most efficient pension system which will achieve improved coverage, adequate income in retirement and at lowest cost, is likely to consist of a basic universal pension with a contributory supplementary pension organized through the social welfare system and based on “pay as you go” (PAYG).

Automatic Enrollment by itself will not solve pension system problems.