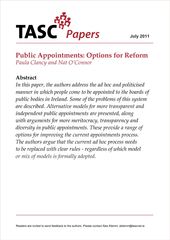 In this paper, the authors address the ad hoc and politicised manner in which people come to be appointed to the boards of public bodies in Ireland. Some of the problems of this system with arguments for more meritocracy, transparency and Papers July 2011 are described. Alternative models for more transparent and independent public appointments are presented, along diversity in public appointments. These provide a range of options for improving the current appointments process. The authors argue that the current ad hoc process needs or mix of models is formally adopted.