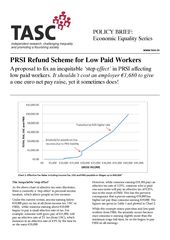 Because employer's PRSI goes up at the same time, the total cost of giving someone an extra one euro in the year could be as much as €1,680. This creates a ceiling that traps many people in low pay, makes overtime or extra hours meaningless, and acts as a barrier to moving from welfare to work.