Submission on Investment to DPER April 2017 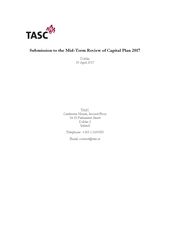 TASC's submission to the Mid-Term Review of Capital Plan 2017 as per the invitation from the Department of Public Expenditure and Reform.

The submssion suggests that the overall investment level foreseen in the Mid-Term Review remains too low and must be increased.  This submission argues why this is the case and how investment can be increased.

There are three key messages which we think that the Department should consider.