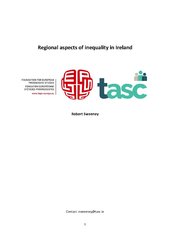 This short paper examines regional components of inequality in Ireland. It first looks at differences in income and living standards between regions, overviewing literature as it relates to the period up to 2000. It finds that foreign investment has played a decisive role over the last half century, initially contributing to convergence, but more recently leading to divergence. During the 2000s the property bubble narrowed regional disparities, but the export-based recovery largely reversed this process.

The paper then looks at inequality within regions of different population density, essentially within rural communities, towns, and cities. The welfare state plays an important role in reducing inequality in all locales, though inequality is found to be higher in densely- populated areas. Inequality in each group broadly follows nationwide trends as it grew somewhat during the 2000s, fell post-crisis, and has risen somewhat since the recovery.

In concluding the paper we reflect on the findings. We provide some discussion of the future of regional development in Ireland, and what this means for inequalities within and between the country.