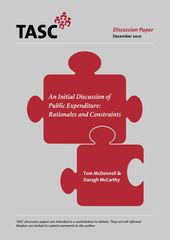 The two initial discussion papers - An Initial Discussion on Public Expenditure: Rationales and Constraints, and Public Expenditure: The Composition of Spending, Income Equality and Economic Growth – were co-authored by TASC policy analyst and economist Tom McDonnell and research assistant Daragh McCarthy, and are intended as short overviews of the area.

Rationales and Constraints looks at the justifications for, and the costs associated with, public spending. Pointing out that Government efficiency has been found to be strongly associated with positive economic performance, the paper suggests that, to maximise efficiency, a responsible government should automatically undertake a full cost benefit analysis of all major tax and spending programmes and a full audit of efficiencies within spending programmes.

“The current crisis engulfing Ireland has generated an unprecedented level of interest in the budgetary process and on how we choose to tax and spend. In advance of the budget and as a response to this increasing interest in public expenditure, TASC will be generating an ongoing series of resources to ‘explain’ public spending in Ireland.

“Economic decisions are a function of choices – and information is vital if we are to make informed choices. Government spending is too important to be kept under wraps, which is why TASC has embarked on this project”, Ms. Clancy said.