Myths of the Irish Crisis: April 2011 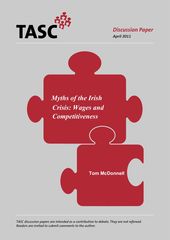 Equality think-tank TASC today released Myths of the Irish Crisis: Wages and Competitiveness, a discussion paper by TASC economist Tom McDonnell examining two distinct but related claims. First that Ireland lost competitiveness within the European Union in the last decade and second that high labour costs in low-wage sectors are contributing to the employment crisis. A digital version of the document is available here.

Based on a review of the literature together with Eurostat data, the paper concludes that Ireland did not suffer an overall loss of competitiveness prior to the economic crash. The paper also refutes arguments that labour costs in the low-paid services sectors – sometimes viewed as undermining Irish competitiveness – are high by international standards. Instead, an examination of Eurostat data projects that 2010 labour costs were 9.3 per cent below the EU-15 average in the hospitality sector, and 8.8 per cent below the EU-15 average in the wholesale/retail sector.

“TASC welcomes the Government’s re-stated commitment yesterday to reversing the recent cut in the Minimum Wage. However, we remain extremely concerned at proposals to review the terms, conditions and pay of workers covered by JLC structures. Most of the people concerned work in low-wage sectors – they clean our offices and serve our meals. TASC has previously demonstrated that reducing their pay will reduce the state’s tax take and increase public spending on social protection measures such as Family Income Supplement.

“If we look at the evidence being published by TASC today, it is clear that Ireland has not suffered a loss of competitiveness relative to the rest of the European Union.

“In addition, Irish low-paid workers cost their employers less than many of their European counterparts. Countries such as Denmark, Sweden and Finland have successfully weathered the economic crisis, while maintaining much higher hourly labour costs in the low-wage sectors than the levels in Ireland.
“The short-sighted focus on cutting wages obscures the need to tackle the immediate problems in the Irish economy. In particular, low demand will merely be exacerbated by cutting wages further.

“We need to maintain and boost our competitiveness and we need to grow jobs. Neither of those aims will be achieved by cutting wages, reducing demand and increasing inequality. Rather, what we need are banks that lend, investment for the short-term in job-rich activities such as home insulation, and investment for the long-term in education and R&D to drive innovation.

“Above all, economic recovery requires policies based on evidence rather than on assumptions that have been shown to be seriously flawed”, Dr O’Connor concluded.