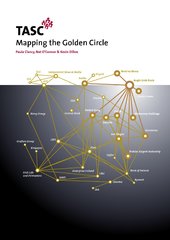 This report tested the question whether a small number of interconnected businesspeople operated at the apex of Irish business during the boom years 2005-2007.

Mapping the Golden Circle reveals the extent of the network of directors across 40 of Ireland’s top private companies and state-owned bodies in that period. Together, these companies employed 310,000 people and had a combined turnover (or equivalent) of nearly €80 billion. The 40 companies studied in this report are household names and include Bord Gáis, the Central Bank, AIB, Smurfit, Anglo Irish Bank, Ryanair and Aer Lingus. The total number of directors involved in managing these companies was 572. In the period 2005-2007, a network of 39 people held positions in two or more of these bodies. Between them, these 39 – referred to as the Director Network in TASC’s report – held a total of 93 directorships.

Mapping the Golden Circle provides evidence of the risk of 'groupthink' and lack of independence at Board level, and provides a basis for substantially strengthening corporate governance in Ireland. The report also provides evidence that there was a trend of “excessive remuneration” for the CEOs of both state-owned and private companies. On average, their pay rose by over 40% between 2005 and 2007, while combined inflation for these two years ran at just over 9%.