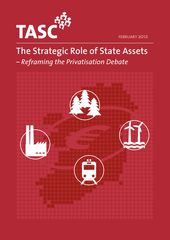 TASC today launched a new report on state assets. In addition to examining past experiences of privatisation in Ireland and internationally, the document – entitled The Strategic Role of State Assets - Reframing the Privatisation Debate – makes a number of specific recommendations regarding individual state-owned enterprises. A digital version of the document is available here.

Commenting on the report’s finding, TASC Director Nat O’Connor said: “TASC’s research indicates that, instead of merely focusing on potential once-off yields, the privatisation debate needs to address the full costs and benefits to the public and the economy from the current and potential future role of state assets and enterprises. These calculations must take into account the ‘triple bottom line’ of economic, environmental and social costs and benefits".