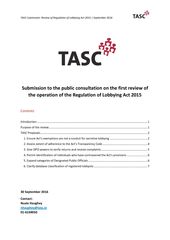 Lobbying is an activity in Ireland that historically has been conducted behind closed doors. The main impact of the Regulation of Lobbying Act 2015 is to allow citizens to see which lobbyists are seeking to influence whom in relation to public policies and public spending.

The Act has many positive features, and the lobbying regime it has introduced was described as “potentially transformative” in an independent review of Ireland’s first National Action Plan under the Open Government Partnership. Particularly welcome is the Act’s focus on regulating ‘lobbying’ rather than lobbyists and its definition of lobbying as ‘relevant communications’ rather than ‘attempts to influence’.

This submission to the public consultation on the first review of the Act makes six proposals for consideration by the Department of Public Expenditure and Reform. These aim to:

1. Ensure that the Act’s exemptions are not a conduit for secretive lobbying.

2. Assess the extent of adherence by public bodies to the Act’s Transparency Code.

3. Give the Standards in Public Office Commission powers to verify returns and receive complaints.

4. Permit the identification of individuals who have contravened the Act’s provisions.

5. Expand the categories of Designated Public Officials - the lobbied under the Act.