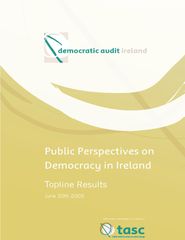 This paper describes the process of conducting a democratic audit in Ireland, with particular emphasis on the distinctive methodological features which may be of interest to the wider international community of auditors. We also outline preliminary findings from the audit which we present in the context of some of the broad economic and social changes which have occurred within Irish society in recent years.

In presenting these findings the focus is mainly on a number of sections within the Audit, namely Nationhood and Citizenship, Civil and Political Rights, Economic, Social and Cultural Rights and Democracy Beyond the State. These sections have recently been the focus of an expert roundtable on Citizenship, Democracy and Human Rights organised jointly by TASC and Amnesty International Irish Section.

As such they are the most developed sections of the Irish Audit to date. The findings from a benchmarking public opinion survey, carried out as part of the Audit, are used to help us understand the implications of some of these findings.