Inequality and the top 10% in Europe - Full Report 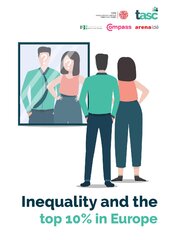 This report examines the financial position and attitudes towards inequality amongst the top 10% of income earners in four European countries: Ireland, the UK, Sweden and Spain. The countries in the report were selected because of their distinctive economies, welfare policies and experiences of the 2007/8 financial crisis.

The study concentrates more accurately on the top 10%, excluding the extremely wealthy in the top 1%. The vast majority of those in the top 10%, not just in Ireland, but across all four countries within the study, do not see themselves as being ‘rich’.

It confirms that since the economic crash of 2008, the top 1% of earners is moving further away from the rest of population, including the remaining 10%. In reality, the vast majority in the top 10% decile are now closer to the median earner (at 50%) than they are to the 1%.

The authors acknowledge that most studies of inequality concentrate on the status of the wealthiest 1% versus the other 99%. However, given their high participation in conventional politics and proven political influence, the researchers believe that it is also vital to understand the relative economic position and perceptions of economic security and inequality held, not just by the top 1% but the remaining segment of the top 10% also, if structural inequality is to be realistically addressed by policy makers.

The full report was produced in partnership with Compass (UK), Arena Idé (Sweden) and Fundación Alternativas (Spain), and supported by FEPS, the Foundation for Progressive Studies.