Flourishing Society -The Role of the Economy 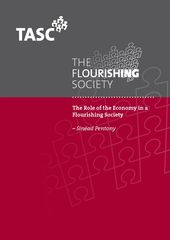 This essay aims to stimulate debate on the society we would like to live in ‘after the crisis’, and on how the economy needs to be transformed to service a flourishing society. There are realistic, progressive alternatives to a return to ‘business as usual’. These alternatives involve a new and different growth model: one that seeks to optimise economic, social and environmental sustainability where possible.

The predominantly market-driven, infinite-growth model of the recent past has let us down. The financial crisis exposed deep flaws in the approach to economics that has dominated policy-making for a generation. Economic liberalisation has not delivered on its promise of rapid growth on a consistent basis, but has rather been characterised by booms and crashes. A minority of people and corporations have benefited disproportionately from the booms, as wealth and incomes have become increasingly concentrated, while those who experience the most negative effects of crashes have seen few benefits in the good times. Inequality in ‘developed’ economies t has risen to record levels, and has contributed to, and exacerbated, many of the social ills in society.

There is also emerging evidence that rising inequality helped create the global
crisis.

Essentially, orthodox economic theory assumes the ever increasing consumption of finite resources. Growth, in the sense of using more and more resources, is not sustainable when there is a limit to resources. The assumption that economic growth is a good in itself, and that the benefits of economic growth automatically trickle down to all, has proven to be flawed.

The market-driven model of economic development has given rise to the situation where society serves narrow short-term economic interests, rather than the economy being designed to serve society for the benefit of all citizens. Consequently, an over-emphasis on growth has superseded societal and human well-being, demonstrating a profoundly distorted sense of values in which
quality of life, human life and dignity are subordinated to material achievement.

The world is warming and we are running out of non-renewable sources of energy. The atmosphere cannot absorb the levels of carbon dioxide being pumped into it for much longer without triggering irreversible climate change. At the same time, material achievements such as better housing are important; we want a future where people can work, where basic needs are satisfied and where human dignity is respected. But can we perhaps achieve those goals within an economy defined by a new vision; a vision premised on the idea of flourishing within limits? In the context of this vision, we need to create a culture which values the collective as well as the individual, a culture of the common good that has equality at its core, and which assumes responsibility for intergenerational care of the planet.