Failed Design: Ireland's Finance Acts and their Role in the Crisis 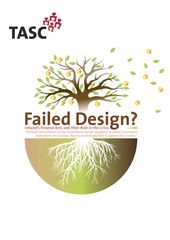 “As a think tank dedicated to combating Ireland’s high levels of economic inequality, TASC’s perspective on budgetary legislation is informed by three simple questions: Who benefits? Who pays? And how is economic equality advanced? Our analysis of Ireland’s Finance Acts highlights Ireland’s over-reliance on tax expenditures – an over-reliance which has created inequalities between individuals and economic sectors, while failing to generate sustainable, job-rich economic activity. Only by changing the overall direction of the economy – and, therefore, changing the thrust of future Finance Acts – can we achieve recovery with equality”.

“TASC has long argued that tax expenditures are inequitable and inefficient – and that tax avoidance is a major drain on State revenue. Last year, TASC demonstrated that tax breaks cost up to €7.4 billion. We know that tax breaks are inherently unequal – that, for example, around 80 per cent of pension-related tax breaks go to benefit the top 20 per cent of earners. What Failed Design? Ireland’s Finance Acts and their Role in the Crisis shows is that tax expenditures are also inefficient: they distort markets while failing to support sustainable development and job creation.

“The jobs crisis is at the heart of the fiscal crisis. There is an urgent need to ensure that tax measures support the productive economy – the economy which provides jobs, which in turn results in a higher income and consumption tax take. The success of Ireland’s Finance Acts must be measured against that goal. To date, however, the Finance Acts have been skewed in favour of attracting multinational corporations and foreign direct investment without sufficiently discriminating between productive, job-rich sectors (such as manufacturing) and unproductive, job-poor sectors such as financial services.

“As well as supporting job creation and sustainable development, the Finance Acts have the potential to provide a toolkit which can help us redress Ireland’s high levels of economic inequality. In order to create a truly progressive tax system, as well as ensuring the revenue streams we need to provide quality public services (which themselves enhance equality) we need to look at taxing wealth as well as income.