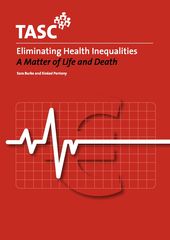 There is now a growing body of evidence suggesting that a more equal society would see improved health outcomes for everyone, even the wealthiest in society. In this report, TASC proposes a range of measures which, if implemented, would put set us on the path to eliminating health inequalities and saving lives.

The report illustrates how responses to the current economic crisis are disproportionately impacting on low-income and vulnerable groups, to the detriment of their health in both the short and the long term. The publication of this report was timely, as it coincided with the launch of the Government’s consultation on a new public health policy. The TASC report identifies a wide-ranging set of measures which, if implemented, would put the elimination of health inequalities at the cente of public policy. The opportunity now exists for these measures to form part of the Government’s new public health policy. These policy choices need advocates from across the spectrum of stakeholders, and they must be prioritised and resourced.

Drawing on a number of sources, this report shows that there is a social gradient across health inequalities, with health improving and life expectancy increasing in line with higher social class, income and educational attainment: there is a six year gap between the life expectancy of professional workers and their unskilled counterparts, while the gap for women is 4.8 years. There is also a direct relationship between social spending and health status, and that Ireland’s relatively low social spending may help explain our poor outcomes for particular groups in Irish society – for example, those living in deprived areas, those suffering socio-economic disadvantage, and specific groups such as children and Travellers. What this report shows is that inequality is a preventable cause of ill health and death.

The report identifies the need for a more equal distribution of income and wealth if health inequalities are to be eliminated. TASC has identified a series of re-distributive measures through changes to the tax system and investment in education and health services that will help achieve this goal. The report also identifies the need to put better health outcomes at the heart of policymaking and recommends that an Independent Review of Health Inequalities be established. TASC makes recommendations on the creation of a single-tier health service that is funded on the basis of solidarity and access to which, is based on medical need, rather than ability to pay. Finally, none of these changes can happen without political leadership and institutional reform and the report makes a number of recommendations aimed at strengthening the political and inter-departmental focus on health inequalities.