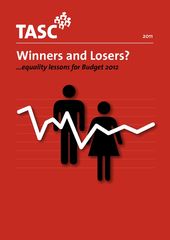 Tax and spending changes in budgets can have extremely different impacts upon people living on different levels of income. Likewise, budget decisions can affect men and women very differently, for a range of reasons.

In TASC's previous budget proposals, the need to audit both the economic efficiency and the equality of budget proposals was highlighted. This report presents the results of an initial study to clarify what is meant by an 'equality audit'. It explores what effects on equality it is possible to demonstrate using existing data. The effect of Budget 2011 decisions on lower and higher income households was examined, as were the effects on people due to their gender or sexual orientation. A full equality audit would need to cover more areas, such as people with disabilities or people from minority ethnic backgrounds.

The first observation to be made is that much more comprehensive data is needed on incomes and wealth in Ireland, as well as on the tax and welfare systems.

However, there is sufficient available data to show that, when the basic tax and welfare changes from Budget 2011 are examined for employees and for people reliant on state transfers, households on different income levels were affected in a significantly unequal way. Lower income households lost proportionately more of their incomes than higher income households. Likewise, the available evidence shows women to be more badly affected by the last budget than men.

It is a major deficiency in Irish budgets that comprehensive distributional analysis is not carried out to inform the Dáil before members vote on budget measures. Such analysis is common across Europe and is considered an essential part of budget debates.

It is absolutely feasible for the Department of Finance to produce an analysis of the distribution of income and wealth, and to show how this will be changed by the measures in Budget 2012. Austerity measures in recent budgets have had a disproportionately negative impact on the living standards of people on lower incomes. It is time that budget decisions are subjected to much more detailed scrutiny.

Suggestions and constructive criticism from readers is welcome, to help TASC develop the methods used in this study.