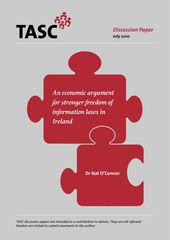 This paper, authored by Dr Nat O’Connor, restate the case for strong laws to enforce the public’s right to know what government and public bodies are doing.

Secret government, hidden information and blanket confidentiality are all inextricably linked to costly decisions which could be avoided if more people knew about them sooner. We need to open up policy-making to public scrutiny – by starting at the top and insisting that real explanations for policy decisions are given to the public by ministers as a matter of course.

TASC’s work on open government follows on from our work on public bodies and accountability, published as Outsourcing Government in 2006, and the report of the Democratic Audit Ireland project, Power to the People, published in 2007. Strengthening Ireland’s democracy is vital to securing sustainable economic development, and public access to complete information is a basic right to ensure that explanations and evidence are given for the public policy decisions which affect us al.

In An Economic Argument for Stronger Freedom of Information Laws in Ireland, Dr O’Connor presents the evidence that the current fees regime does not lead to any cost recovery and in fact is likely to increase administrative costs and deter ordinary people from making requests. He also demonstrates that the costs of administering FOI are far outweighed by the material benefits in terms of money saved as a result of the prevention or early detection of errors made by public bodies. Finally, Dr O’Connor points out that stronger FOI is essential to facilitate businesses re-using public data as a resource – a resource which, based on EU figures, could be worth a minimum of €83 million annually.