After the Celtic Tiger: A Nordic Vision for a New Ireland? 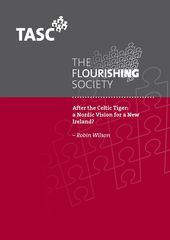 The first decade of the new millennium has seen a remarkable turnaround in Ireland. The ‘Celtic Tiger’, acclaimed as the poster-boy for neo-liberal economics around the world, bounding so effortlessly forward just a few years ago, was mortally wounded by the local manifestation of the global collapse of financial capital, the black hole that was Anglo Irish Bank. And in a more minor key, the northern ‘peace process’, product of years of diplomatic effort since the AngloIrish agreement of 1985, lost its lustre as a transferable roadmap from ethnic conflict amid proliferating ‘peace walls’ and rising violence at home and George Mitchell’s failure to work his Stormont magic in the middle east.

An emergent alternative has however been apparent in the argument articulated by the Irish Congress of Trade Unions (2009). This has been evident in its Keynesian rejection of the deficit-reduction timetable. The ICTU claim in effect is that after Charlie McCreevy’s pro-cyclical budgets inflated the bubble Brian Lenihan’s pro-cyclical budgets have burst it, rather than letting the economic balloon cool gently. The task now is to ensure revenue is raised primarily from the wealthy, with a lower propensity to consume than the poor, and to invest in sustainable economic recovery, so as to avoid the 2010s being a Japanese-style ‘lost decade’.More broadly, David Begg of ICTU has seen in the crisis the opportunity to open debate on an alternative social model for Ireland, based on the experience of the Nordic countries (Begg, 2008). If Mary Harney’s slogan placing Ireland ‘closer to Boston than Berlin’ encapsulated the claims for the Celtic Tiger, this not only discounted the key role played by the European-style social-partnership arrangements which resolved the 80s crisis and provided the basis for the macroeconomic stability on which expansion was built (Sweeney, 2008: 115-26). It also of course defied geography—and Copenhagen, Stockholm, Oslo and Helsinki are all close European neighbours too.

In developing its ‘social solidarity pact’ as a route out of the crisis in 2009, ICTU was assisted by an economist who advised the then social-democrat finance minister tackling the early 1990s financial crisis in Sweden. The key lesson he drew was the need for equitable burden-sharing (McGreevy, 2009). This paper sets out what is meant by the ‘Nordic model’ in various domains: the welfare state, the society and the economy. It explains why it is superior to the Anglo-American approach implicitly pursued in Ireland, and indeed to other continental European models. It addresses the limits of the model and the need for renovation. And it offers concrete implications throughout for the Irish context, socially, economically and politically.