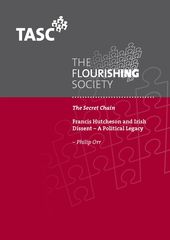 Francis Hutcheson is associated with the Scottish Enlightenment of the 18th century, due to his professorial role at Glasgow University. During his period as an academic in Scotland, from 1729 until 1746, he taught the philosopher David Hume and the economist Adam Smith, as well as enacting the roles of teacher and father–figure to the sons of Irish dissenting families who had travelled to Glasgow to engage in the higher education that they were denied under the Williamite settlement.

However, Hutcheson can be considered an Irish intellectual of considerable distinction. This article will consider whether his writings have had any influence on subsequent Irish history, as well as contributing to political developments beyond these islands. It will ask whether his philosophy speaks into the social and economic dilemmas faced in contemporary Ireland and whether Hutcheson possesses a vision of human nature and of society that poses pertinent questions about the prevailing verities and contemporary ethos of Irish capitalism.